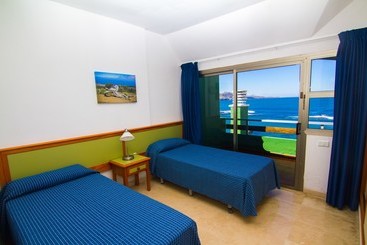 these apartments are situated right on the promenade of Las Canteras Beach in Las Palmas de Gran Canaria, one of the social... 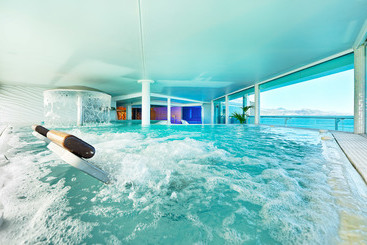 Situated at the heart of the city, this pleasant beach hotel lies directly on the Gran Canary's shopping street, the promenade... 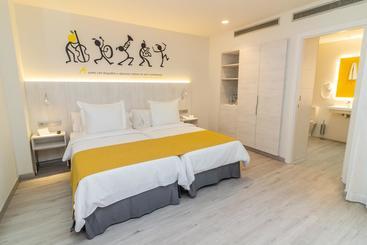 This welcoming hotel is located in the holiday district of Las Palmas approximately 50 m from the nearest beach. Countless... 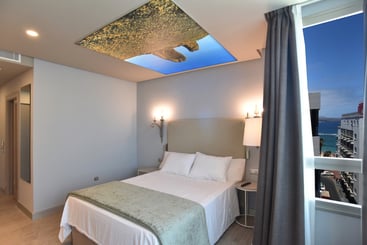 Hotel Doña Luisa is located in the vibrant tourist and commercial center of the city of Las Palmas, just a few steps away... 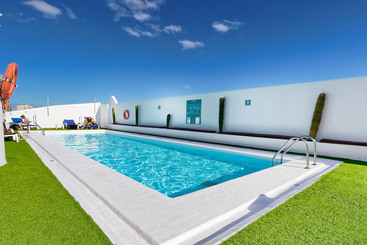 This hotel is located in the middle of the tourist centre of Las Palmas, only a stone?s throw from the Las Canteras beach.... 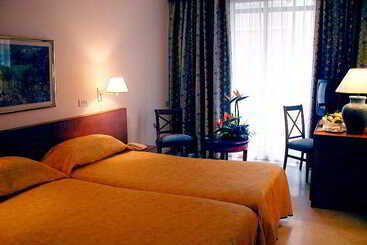 This hotel is situated at the heart of Las Palmas, close to shopping and entertainment centres. The famous ?Las Canteras?... 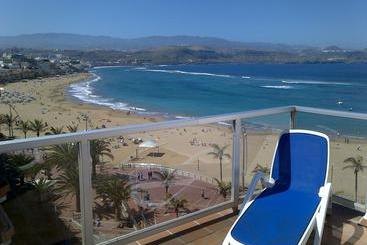 Home to spectacular sandy beaches and bustling bars and eateries, Las Palmas is the vibrant capital of Gran Canaria, offering a plenitude of first-rate museums and historic sites to explore. Some of Spain's finest urban beaches are found right here in the city, but you can find even more — from wild and rugged to tranquil and secluded — nearby.

You can book a number of different affordable accommodation options in Las Palmas de Gran Canaria, including sea-view apartments and quieter suburban properties.

Las Palmas de Gran Canaria has a number of charming neighbourhoods to explore:


What to see and do in Las Palmas de Gran Canaria

Aside from the fantastic urban beaches, Las Palmas also has a number of must-visit museums. Museo Elder de la Ciencia y la Tecnología is a modern science museum, Museo Canario gives an excellent history of the island and Casa-Museo de Colón is a brilliant tribute to Columbus' voyages (Columbus anchored here). The city's aquarium, Poema del Mar Aquarium, is an excellent option for children, and you'll find amusement parks like Catapum and Urban Planet in the vicinity.


What to eat in Las Palmas de Gran Canaria

Las Palmas is a melting pot of cuisines and cultures, with everything from excellent Chinese eateries to vibrant Indian restaurants. Alfresco tapas dining is particularly popular, so be sure to indulge in papas arrugadas (wrinkly potatoes), ropa vieja (meat, chickpeas and onions), pimientos de padrón (salted peppers) and churros de pescado (battered and fried fish).

Las Palmas hosts colourful fiestas and cultural celebrations throughout the year. Semana Santa (Easter) is celebrated with religious processions and Corpus Christi is celebrated with carpets of flowers. In June, the founding of the city is commemorated with Fiestas Fundacionales, a period of eye-catching parades and bonfire celebrations.


How to move around in Las Palmas de Gran Canaria

There is a prominent bus infrastructure network with yellow buses serving the metropolitan area and tourist hop-on, hop-off buses serving the main sites. Taxis are also a popular way to navigate the city, particularly in the evening.

Las Palmas has a tropical desert climate with year-round sunshine, warm summers and very mild winters. This has led to the city becoming a favourite for many winter holidaymakers.

Las Palmas is an old city with long naval history with Spain. Christopher Columbus stopped-by here in 1492 and you can explore his life and legacy in a museum dedicated to him containing many artifacts from his voyages.

The most centrally located hotels in Las Palmas de Gran Canaria with the best ratings are: Santa Catalina, A Royal Hideaway Hotel 5*gl and Alcaravaneras Hostel.

It depends on the category of the hotel. If you want to stay at a 4-star hotel in Las Palmas de Gran Canaria, the average price per night is 34 €, while you will pay an average of 25 € for a 3-star hotel, and in a more luxurious 5-star hotel, you"ll pay around 51 €.

If you're bringing a vehicle, we recommend that you book a hotel with parking in Las Palmas de Gran Canaria, like Hotel Bull Reina Isabel & Spa, Hotel Parque or Santa Catalina, A Royal Hideaway Hotel 5*gl.

You can make reservations at Santa Catalina, A Royal Hideaway Hotel 5*gl if you´re looking for a hotel with valet service for your visit to Las Palmas de Gran Canaria.

According to our clients, if you´re travelling with children, the best hotels in Las Palmas de Gran Canaria are Hotel Aloe Canteras, Santa Catalina, A Royal Hideaway Hotel 5*gl and Hotel Parque.

If you want to save time, the hotels in Las Palmas de Gran Canaria with express check-in and check-out are Hotel Lemon & Soul Las Palmas, Hotel Ac Gran Canaria By Marriott and Hostel Hostal Kasa.