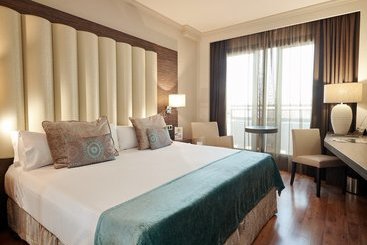 This hotel is 3 miles from Alhambra Palace, 1 km from the University of Granada and in the railway station of the city, a... 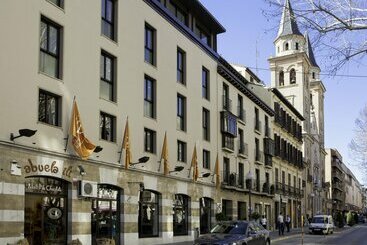 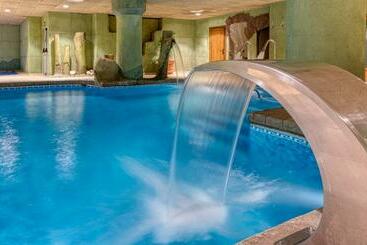 This spectacular hotel and spa is conveniently located right next to the centre of Granada. The monumental city centre and... 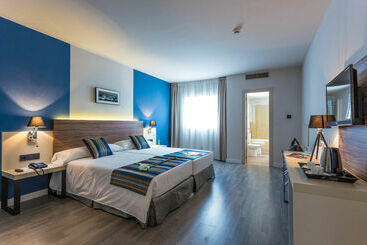 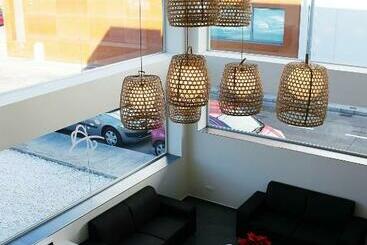 Featuring a seasonal outdoor pool, Urban Dream Nevada is located in Granada. The property has a restaurant and free WiFi...

Located in Plaza Isabel la Católica, in the centre of Granada, Marquis Hotels Issabel's features a restaurant. The modern... 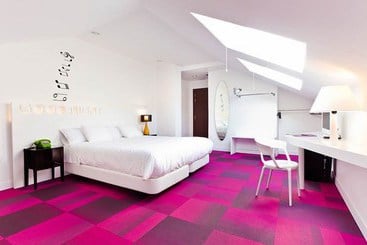 The Apartments 3000 Granada Catedral Plaza is located in the historic center of Granada, just a step away from the Cathedral...

Book your cheap hotel in Granada

Located in the autonomous community of Andalusia in Spain, Granada is the capital city of the province that shares its famous name. Sitting at the foot of the amazing Sierra Nevada mountains and at the confluence of the Darro, Genil, Monachil and Beiro rivers, the city is a beautiful example of classic Spanish architecture and culture.

One of the aspects of Granada’s strong tourism reputation is the wide availability of cheap and affordable hotel accommodation for European and worldwide travellers.

The coolest neighbourhoods for the tourist trail are:


What to see and do in Granada

Granada is a perfect location for sightseeing. Some of the very best attractions that should not be missed include the amazing Alhambra, a truly magnificent fortified hilltop Moorish complex that is filled with history, the Generalife which is a summer palace with elaborate gardens that dates back to the 1100s, and Royal Chapel of Granada which is an ornate and historical burial site used for some of the most iconic and famous old Catholic kings.


What to eat in Granada

Granada enjoys a rich culinary culture with a long list of regional dishes that any tourist should be seeking out to try. Some of the most famous and popular examples of regional cuisine include habas con jamon which is fava beans with serrano ham, Andalusian gazpacho which is the localised version of the cold soup, and choto al ajillo which is a kind of sausage with wrapped intestines!


Typical events and festivals in Granada

There is always something going on for tourists and locals alike to enjoy. Some of the most famous events hosted in Granada across the year include the Deria del Corpus Christi which is a 60 day celebration over Easter, the Festival Internacional de Musica y Danza that takes place every June and July, and the Dia de la Cruz which see all of the squares, balconies and patios in the city adorned with beautiful flowers and crosses for three days.


How to move around in Granada

Granada is a city with good public transport links both internally and in connection to neighbouring destinations. There is an extensive and well maintained public bus network that services all of the key routes across the city, along with a flourishing private taxi business for those who prefer private travel. Nearby Malaga can be reached via both the bus and the train. Granada is blessed with a great location in terms of intercity travel.


The climate in Granada

Granada is classified as having a ‘slightly continental’ climate, which means that it experiences hot, sunny summers and moderately cold winters. Temperatures can range extensively across the year, with an average in January of around 7 degrees compared to an average of around 29 in August. The summer months are understandably the most popular time in terms of vacation tourism.

It depends on the category of the hotel. If you want to stay at a 4-star hotel in Granada, the average price per night is 29 €, while you will pay an average of 28 € for a 3-star hotel, and in a more luxurious 5-star hotel, you"ll pay around 62 €.

Hotel El Soto De Roma is the closest one to Granada-Federico García Lorca.

You can make reservations at Hotel áurea Washington Irving By Eurostars Company, Hotel Palacio De Santa Paula, Autograph Collection and Hotel Hospes Palacio De Los Patos if you"re looking for a hotel with valet service for your visit to Granada.

The best hotels in Granada for adults only are Hotel Elena Maria and Hotel Abadía Granada Centro.

According to our clients, if you´re travelling with children, the best hotels in Granada are Hotel Nh Collection Granada Victoria, Hotel Palacio De Santa Inés and Hotel Eurostars Puerta Real.

Some of the options for hotels with non-smoking rooms in Granada are Parador De Granada, Hotel Eurostars Puerta Real and Hotel Nh Collection Granada Victoria.