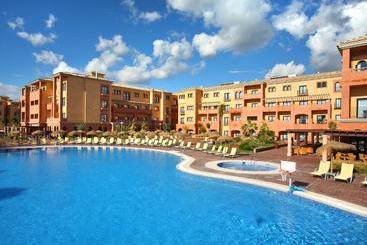 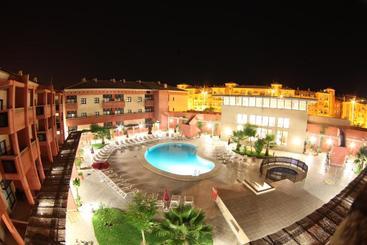 The hotel is situated in the Enebrales Natural Park, surrounded by wild forests of Mediterranean pines and sandy beaches.... 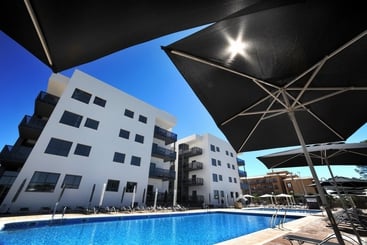 The extraordinary modern flats are located in an impassive environment surrounded by nature on first line of the beach with... 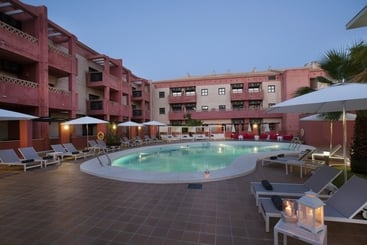 This apartment complex boasts a privileged position in Punta Umbria. It is second beach line, allowing its visitors to go...

Punta Umbria sits on the Costa de la Luz in Huelva province in Andalusia, southwestern Spain. The pretty fishing town sits on the estuary of the River Odiel and is the closest beach resort to the city of Huelva.

The town has an interesting history that began with the Romans, went through the Moors, and the arrival of the huge Rio Tinto mining company. Its most noticeable event is probably when it was used as the site for Operation Mincemeat in WWII, a major misinformation exercise (as told in the movie, The Man Who Never Was).

The resort is popular with Spanish holidaymakers from Huelva and Seville but there’s plenty of cheap and affordable hotel accommodation in Punta Umbria to entice foreign visitors.

Visitors to Punta Umbria can enjoy varied landscapes and environments:


What to see and do in Punta Umbria

Punta Umbria has plenty of attractions to enjoy when not spending time on the beach.

The architectural attractions that make great photos are the Torre Umbria a defensive fort that protected the coast from Barbary Pirates, Casa de los Ingleses, and the churches Iglesia de Lourdes and Iglesia del Carmen. A fun trip is the Canoa de Punta Umbría, a boat that runs between the port of Huelva and Muelle de Pasajeros de Punta Umbría. The natural areas around the town are great for walking and outdoor activities as well as bird watching and there are plenty of water sports to be had on the beaches.


What to eat in Punta Umbria

Two of the main festivals in Punta Umbria celebrate the town’s gastronomic connection with the sea. Both held in April, the Festival de la Chirla y la Coquina celebrates the clam while the Feria Nacional de la Gamba y el Boqueron sees a million prawns distributed to the public and boats hired for tuna fishing trips. Other events are Romería de la Santa Cruz on May 1at, and Fiestas del Carmen on August 15th.


How to move around in Punta Umbria

Public transport is the local bus service which also connects the town to Huelva and Seville, from where connections can be made to various places all over Spain. You can go as a passenger on the Canoa de Punta Umbria and taxis are available.


The climate in Punta Umbria

At just 2 m above sea level, Punta Umbria has a warm and temperate climate. Rainfall is the highest in November and lowest in July. August has the highest daily average temperature and January the lowest.

The most centrally located hotels in Punta Umbria with the best ratings are: Hostal Patio Andaluz, Hotel Pato Rojo and Hotel Ayamontino.

If you're bringing a vehicle, we recommend that you book a hotel with parking in Punta Umbria, like Hostal Patio Andaluz, Hotel Ayamontino or Hotel Barceló Punta Umbría Mar.

Some of the options for hotels with non-smoking rooms in Punta Umbria are Hostal Patio Andaluz, Hotel Pato Rojo and Hotel Ayamontino.