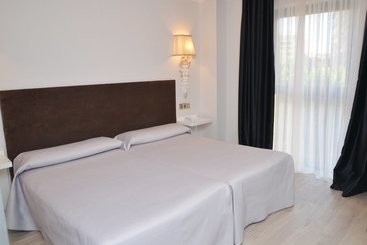 The Hotel is located in the centre of Salamanca, 2 minutes away from the old town and the Plaza Mayor full of life and shops.... 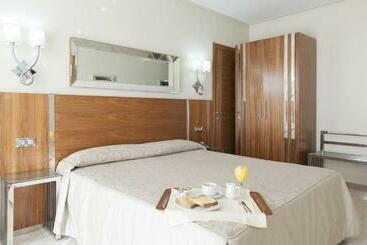 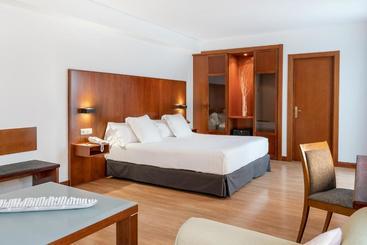 Vincci Ciudad de Salamanca is within a 25-minute walk of Salamanca Cathedral and Plaza Mayor. Its spacious rooms include...

Luxurious hotel located just 600 m (around 5 minutes' walk) from the main square of Salamanca. There is a public transport... This attractive hotel is situated right by Plaza Mayor. The town centre, offering plenty of shopping and entertainment opportunities... 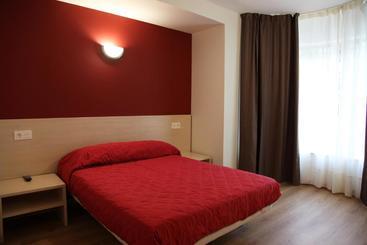 Location: next to the Puerta de Zamora, less than 500 m. from the Plaza Mayor and the historic area. Close to the nightlife... 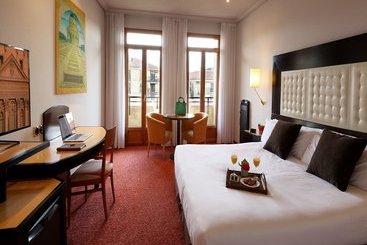 This pleasant city hotel is located in the historical centre of Salamanca and features an architectural style that successfully... Book your cheap hotel in Salamanca

Located in the community of Castil and Leon in western Spain, Salamanca is the capital city of the Province of Salamanca. The city lies in the hilly landscape of the Tormes River, and in 1988 was declared a UNESCO World Heritage Site.

Salamanca is regarded as being one of the most important university cities in the whole of Spain, and accordingly, it attracts thousands of international students every single year.

Salamanca consists of a number of districts:


What to see and do in Salamanca

There is always something to see and do in Salamanca no matter what time of the year you visit. Some of the best attractions that the city has to offer in include a visit to be Salamanca Cathedral, a stunning ornate structure that boasts a number of unique and intricate carvings, the Plaza Mayor which is the 18th century baroque public square, and the Casa de las Conchas which is an amazing shell covered Spanish Gothic palace. Other places of interest are the Museo Art Nouveau y Deco, Convento de San Esteban, and the Clerecía church.


What to eat in Salamanca

Salamanca has a rich culinary history and culture. Some of the dishes you should be seeking out to sample include chanfaina which is steamed rice with pork, charreria which is a classic peasant casserole with chickpeas, and perhaps the most famous of all, the hornazo which is a meat pie heavily associated with the region.


Typical events and festivals in Salamanca

Salamanca hosts a number of high profile and highly attended festivals across the year. Some of the most popular and well known include Semana Santa celebrations that take place across the Holy Week of Easter, the Nochevieja Universitaria student celebrations that take place in the last school week of December, and Fiesta de Santiago Apostol which commemorates the city’s Catholic saint and hero Saint James.


How to move around in Salamanca

One of the best ways to get around Salamanca for tourism purposes is definitely the city’s bus network. The network consists of 13 different bus lines that cover all key areas of the city, with added night buses for busy weekend periods. Alternatively, there is always a taxi service if you want more personal or immediate travel.


The climate in Salamanca

Salamanca is a city that experiences a very varied climate depending on the time of the year. The summers are fairly short, fairly clear, and very warm, sometimes rising up to as hot as 30 degrees for long periods. The winters, however, can be very cold and very wet, with average temperatures of somewhere around 6 degrees. This makes the best time to visit as a tourist generally the summer season between June and early September.

The most centrally located hotels in Salamanca with the best ratings are: Hotel Rector, Hotel Hostal Tormes and Sercotel Puerta De La Catedral.

It depends on the category of the hotel. If you want to stay at a 4-star hotel in Salamanca, the average price per night is 29 €, while you will pay an average of 24 € for a 3-star hotel, and in a more luxurious 5-star hotel, you"ll pay around 48 €.

You can make reservations at Hotel Grand Don Gregorio, Hotel Hospes Palacio De San Esteban and Hotel Alameda Palace if you"re looking for a hotel with valet service for your visit to Salamanca.

According to our clients, if you´re travelling with children, the best hotels in Salamanca are Sercotel Puerta De La Catedral, Parador De Salamanca and Hotel Rector.

If you want to save time, the hotels in Salamanca with express check-in and check-out are Parador De Salamanca, Hotel Hospes Palacio De San Esteban and Hotel Exe Salamanca.

Some of the options for hotels with non-smoking rooms in Salamanca are Hotel Rector, Parador De Salamanca and Sercotel Puerta De La Catedral.

If you're bringing a vehicle, we recommend that you book a hotel with parking in Salamanca, like Hotel Rector, Parador De Salamanca or Sercotel Puerta De La Catedral.