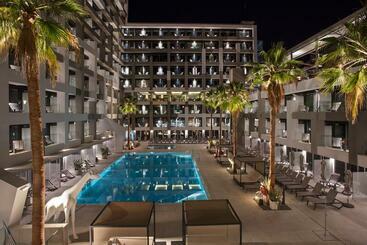 This friendly hotel lies in the El Terreno area of Palma de Mallorca, an approximately 5 minute bus ride from the Plaza Gomila,... 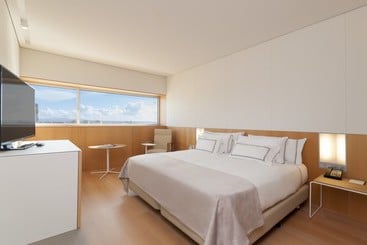 The hotel is located in front of the beach, with easy access to the seafront promenade (Paseo Marítimo) and just a few minutes’... 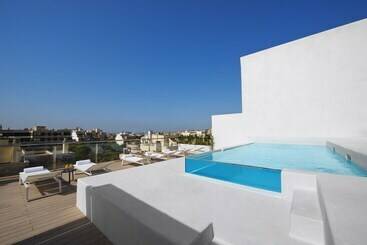 This modern city hotel is located right in the centre, near to the Plaza de España. There are a profusion of wonderful bars,... 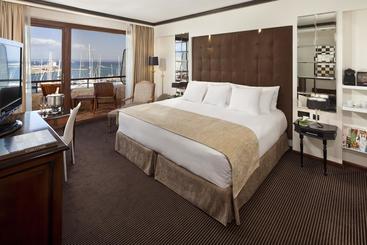 Situated on the quayside in Paseo Maritimo, this comfortable hotel is located at the heart of the Bay of Palma, only 5 minutes... 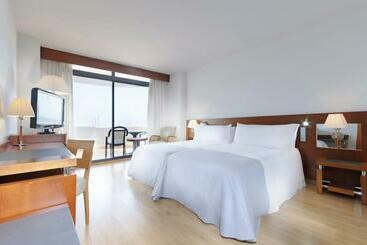 The luxury city hotel is located in the stunning Bay of Palma approximately 5 minutes from the historical centre. There is... 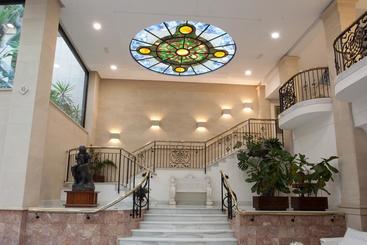 This hotel is ideally located close to the city centre, just a few paces from the elegant Avenida Jaime III and the Paseo... 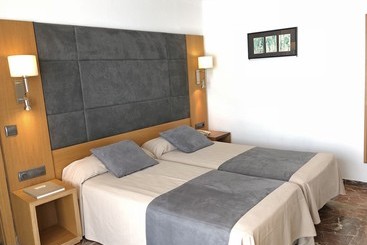 This comfortable hotel is situated directly on the lively seafront promenade in Paseo Maritimo, right beside the harbour.... 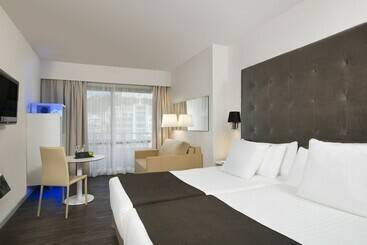 The Palas Atenea, located on the promenade of Palma de Mallorca, is just 500 meters from Bellver Castle, the fourteenth century....

Book your cheap hotel in Palma

Palma is the capital city of the Spanish Balearic Islands. Located on Mallorca, it has a vibrant nightlife and foodie scene in La Lonja, as well as the historic cultural area of Casco Antiguo, the picturesque Old Town where most of the tourist attractions can be found.

As a major seaport city, there is a wide variety of accommodations available. From Paseo Maritimo for a panoramic sea view to Portixol for a family-friendly atmosphere, there’s an area to suit every holidaymaker.

There are many neighbourhoods in Palma, but the best for exploring are:

What to see and do in Palma

Visit La Seu, a 14th-century Gothic cathedral which was built on the walls of the Old Town. The Bishop’s Garden is an oasis of quiet with the classic layout of a Palma mansion garden. For retail therapy, walk along Paseo del Borne. Also known as ‘the golden mile’ it is the most important shopping street and a hub of luxury retailers.

What to eat in Palma

As the foodie epicentre of the Balearic Islands, you should definitely eat like a local. The seafood is fresh and plentiful, but the most popular traditional dish, tombet, is made of vegetables. Although it can be served with meat or fish, the classic recipe uses potatoes, bell peppers and aubergines.

Events and festivals in Palma

Palma has traditional and contemporary events that run all year round. The most important to the area is the Sant Sebastià festival, named for Palma’s patron saint. Starting in the weeks leading up to the saint’s day itself on January 20th, the celebrations include bonfires, music and dancing. February’s Carnival celebrates the beginning of Lent, while late July's Copa del Rey is the biggest sailing regatta in the Mediterranean.

How to move around in Palma

There is a city bus system that includes a loop through the historic centre. You can either buy a ticket from the bus driver or get a multi-journey discount card at a tobacco shop. Taxis operate at all hours, while the Metro light railway service runs until 21:55.

The climate in Palma

Palma’s spring is March to May with temperatures averaging around 22°C. Summer temperatures can reach up to 30º and over, while winters are particularly mild.

More interesting facts about and sights in Palma

The Paseo Marítimo is a seaside promenade that joins the resorts of Playa de Palma, C’an Pastilla and El Arenal, and is lined with hotels and restaurants. The main tourist attraction in Palma, however, is Bellver Castle, which has been a royal residence, military prison and is now the city’s History museum.

The most centrally located hotels in Palma with the best ratings are: Hotel Can Cera - Adults Only, Hotel Palacio Ca Sa Galesa and Hotel Innside By Melia Palma Center.

You can make reservations at Hotel Castillo Son Vida, A Luxury Collection , Mallorca Adults Only, Hotel Palacio Ca Sa Galesa and Hotel Hospes Maricel Y Spa if you"re looking for a hotel with valet service for your visit to Palma.

Hotel Thb El Cid - Adults Only and Hotel Amic Gala are the closest ones to Palma de Mallorca.

If you need a hotel with disabled access in Palma, we recommend Hotel Can Cera - Adults Only, Hotel Castillo Son Vida, A Luxury Collection , Mallorca Adults Only and Hotel Sheraton Mallorca Arabella Golf.

If you want an adult-only hotel in Palma, some of the best options for adults only are Hotel Be Live Adults Only Marivent, Hostal Bonany and Hotel San Lorenzo - Adults Only.

According to our clients, if you´re travelling with children, the best hotels in Palma are Hotel Sheraton Mallorca Arabella Golf, Hotel Castillo Son Vida, A Luxury Collection , Mallorca Adults Only and Hotel Can Cera - Adults Only.

If you want to save time, the hotels in Palma with express check-in and check-out are Hotel Can Cera - Adults Only, Hotel Sheraton Mallorca Arabella Golf and Hotel Palacio Ca Sa Galesa.

Some of the options for hotels with non-smoking rooms in Palma are Hotel Can Cera - Adults Only, Hotel Castillo Son Vida, A Luxury Collection , Mallorca Adults Only and Hotel Sheraton Mallorca Arabella Golf.