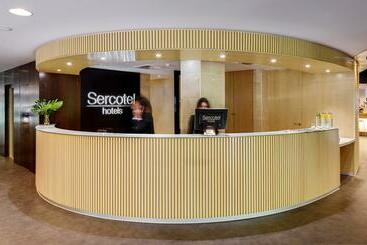 The Gran Hotel Zurbaran is located in the commercial and cultural center of Badajoz, near the Castelar Park. 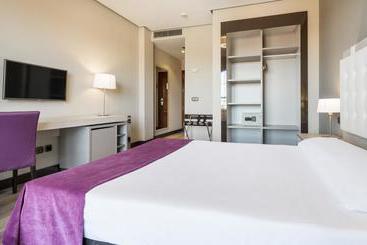 A 15-minute drive from Badajoz city centre, Ilunion Golf Badajoz has a pretty setting next to Guadiana Golf Course. It offers... 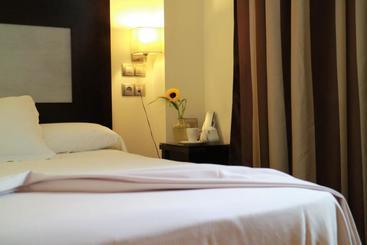 Las Bóvedas is set on the outskirts of Badajoz, near the University campus and the IFEBA Trade Fair Centre. It offers stylish... 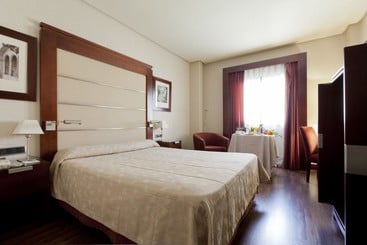 Situated in the main commercial and business centre of the city with good communications to Portugal (Lisbon) and Madrid....

Book your cheap hotel in Badajoz

Located in the autonomous community of Extremadura in Spain, Badajoz is the capital city of the province that shares its name. It is situated very close to the Portuguese border, sitting on the left bank of the beautiful river Guadiana.

With a population of approximately 160,000, Badajoz was originally a settlement occupied by Romans and Visigoths, and today attracts a lot of visitors interested in Spanish history. The city has played significant parts in various conflicts including the War of the Spanish Succession, the Peninsula War, and the Spanish Civil War.

Visitors will easily find a wide array and availability of cheap and affordable hotel accommodation in Badajoz.

The main areas of Badajoz of interest to visitors are:


What to see and do in Badajoz

The attractions and activities of Badajoz are a mix of ancient and modern. As well as all the previously mentioned historical sights, there is also the Archaeological Museum of Badajoz, the Moorish Tower, Torre Espantaperros, and the Puerta de Palmas, a monumental gate in the city’s walls. The most popular modern attraction is the AquaBadajoz a water park and gardens. Another showcase of modernity is the Museo de Bellas Artes.


What to eat in Badajoz

Particular dishes that visitors should make the effort to seek out and sample include morcilla which is a local type of black pudding, Chanfaina, a hearty stew, borrachuelos which are alcoholic sweet fritters, and suckling pig which is a Badajoz speciality. There are also excellent local cheeses and wines. Being close to the border with Portugal, you find many representations of Portuguese cuisine in Badajoz’s restaurants.


Typical events and festivals in Badajoz

Badajoz plays host to a number of different and interesting occasions over the course of the year. Some of the most popular events include the Badajoz Carnival which is one of the most famous in the whole of Spain, the Badasom Flamenco and Fado Festival in July, a celebration of traditional music and dance, and the International Contemporary Theatre and Dance Festival in October and November.


How to move around in Badajoz

The Old Town is best navigated on foot but the easiest way to get around the city is by using the local bus service. There is a large network that services a number of lines throughout Badajoz and the surrounding region and beyond including to Portugal. The railway station also offers regular connections to Madrid. Taxi cabs are always available.


The climate in Badajoz

Badajoz enjoys a pleasantly warm to hot climate all year round. Predictably, there is more rainfall in the winter months that there is in the summer months, and the average temperature annually hovers around 17 degrees. The summer months are considerably hotter and drier, with temperatures up in the high twenties regularly. The most popular time for visitors is June to early September.

The most centrally located hotels in Badajoz with the best ratings are: Sercotel Gran Hotel Zurbarán, San Marcos and Hotel Condedu.

It depends on the category of the hotel. If you want to stay at a 4-star hotel in Badajoz, the average price per night is 27 €, while you will pay an average of 23 € for a 3-star hotel, and in a more luxurious 5-star hotel, you"ll pay around 32 €.

According to our clients, if you´re travelling with children, the best hotels in Badajoz are Hotel Las Bóvedas, Hotel Badajoz Center and Nh Gran Hotel Casino De Extremadura.

If you want to save time, the hotels in Badajoz with express check-in and check-out are Nh Gran Hotel Casino De Extremadura, Sercotel Gran Hotel Zurbarán and Hotel Las Bóvedas.

Some of the options for hotels with non-smoking rooms in Badajoz are Nh Gran Hotel Casino De Extremadura, Hotel Badajoz Center and Sercotel Gran Hotel Zurbarán.

If you're bringing a vehicle, we recommend that you book a hotel with parking in Badajoz, like Nh Gran Hotel Casino De Extremadura, Hotel Badajoz Center or Sercotel Gran Hotel Zurbarán.