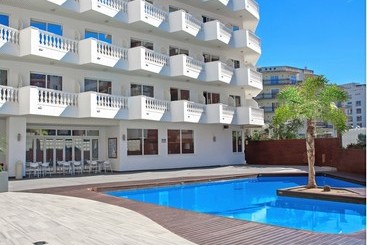 The hotel benefits from an enviable location, being situated in the residencial district of Calella (only 100 m from the... 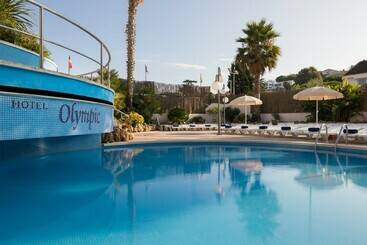 This lovely hotel is situated in Calella, only 400 m from a beautiful beach and 300 metres from the tourist centre. Several... 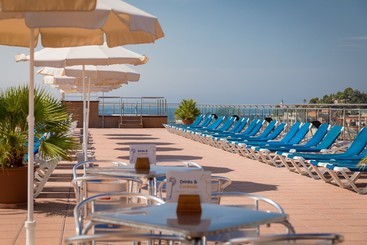 This inviting city hotel is located in a peaceful quarter of Calella, close to the town centre. Various shopping facilities...

Calella, the tourist capital of the Maresme coast, is well-known as being a cosmopolitan and fun town, and enjoys a typical... 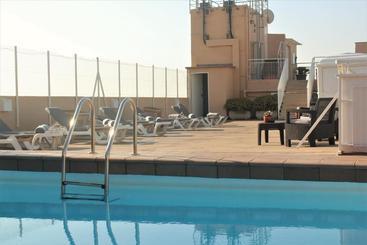 You can find Hotel Alegria Espanya between the sea and the mountains in the old town of Calella. It is situated ideally with... 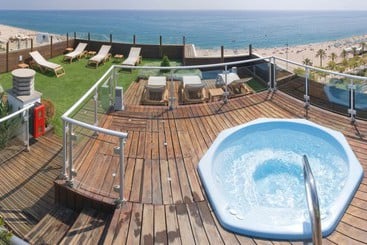 This attractive hotel is located in the tourist center of the town and is separated from the beach (50 m) along the promenade.... 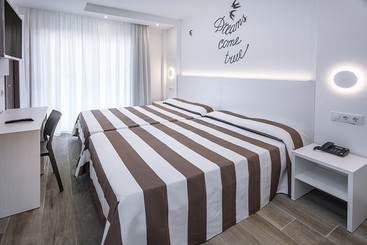 The Hotel Serhs Oasis Park in Calella is situated just 450 meters away from the beach and it has 209 rooms. It is located... 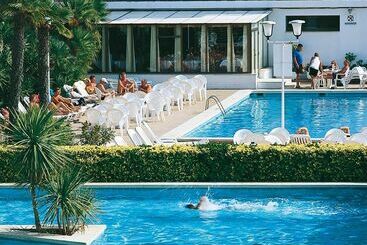 The area has a 3kilometre beach and rocks, from Capaspre there are many small coves to discover. The long sandy beach has...

Book your cheap hotel in Calella

Located along the picturesque Costa del Maresme, Calella is a seaside city northeast of Barcelona that is fast becoming one of the most desirable getaway vacations in the region of Catalonia. Before its tourism boom, the city was known for textiles and fishing.

There are plenty of affordable accommodation options in the Calella area for holidamakers. Choose to stay in budget friendly hostels and hotels in town or close to the seafront..

Calella consists of a number of districts:

What to see and do in Calella

Calella has lots to offer for visitors of all persuasions and interests, including the famous Montenegro National Park, the lighthouse and museum, and the Castell de Santa Florentina in the wine region.

What to eat in Calella

Calella is famous for its wonderful food culture and any visitor absolutely cannot miss out on trying the likes of paella packed with seafood, gallo de Sant Pere which is another fish dish, and bastina which is a garlic and oil dressing that is widely used as an accompaniment to lots of meals.

Typical events and festivals in Calella

A visit to Calella at any time of the year will have some kind of event to enjoy, including the Festimatge Calella in April, Calella Summer Nights in July and August, and Calella Oktoberfest in September and October.

How to move around in Calella

The main form of transport in and around Calella is the reliable and regular bus service. There is also a frequent rail service connecting Calella with Barcelona.

The climate in Calella

Calella enjoys warm summers and mild winters, with a lower than average level of rain through the year. Any rainfall that does arise is usually in the form of sparse thunderstorms in autumn.

More interesting facts about and sights in Calella

Did you know that Calella is the birthplace of famous Arsenal footballing hero Hector Bellerin?

The most centrally located hotels in Calella with the best ratings are: Bed And Breakfast El Pekinaire, Hotel Mediterrani Express and Hotel Kaktus Playa.

It depends on the category of the hotel. If you want to stay at a 4-star hotel in Calella, the average price per night is 20 €, while you will pay an average of 21 € for a 3-star hotel, and in a more luxurious 5-star hotel, you"ll pay around 31 €.

If you're bringing a vehicle, we recommend that you book a hotel with parking in Calella, like Bed And Breakfast El Pekinaire, Hotel Mediterrani Express or Hotel Les Palmeres.

You can make reservations at Hotel Sant Jordi Boutique if you´re looking for a hotel with valet service for your visit to Calella.

If you need a hotel with disabled access in Calella, we recommend Hotel Kaktus Playa, Hotel Volga and Hotel Les Palmeres.

If you´re looking for peace and quiet and want to stay at an adult-only hotel in Calella, we recommend Casablanca Suites Adults Only.

According to our clients, if you´re travelling with children, the best hotels in Calella are Hotel Mar Blau, Hotel Les Palmeres and Hotel Kaktus Playa.

If you want to save time, the hotels in Calella with express check-in and check-out are Hotel Sant Jordi Boutique and Hotel Internacional.

The best hotels with a pool in Calella are Hotel Mediterrani Express, Hotel Kaktus Playa and Hotel Sant Jordi Boutique.

Some of the options for hotels with non-smoking rooms in Calella are Bed And Breakfast El Pekinaire, Hotel Mediterrani Express and Hotel Kaktus Playa.