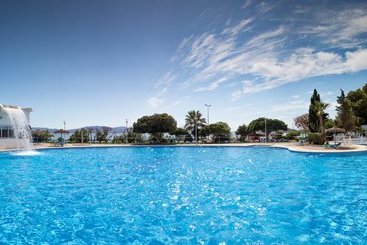 This comfortable beach hotel is located in the tourist area of La Manga del Mar Menor. The inviting turquoise-blue sea and... 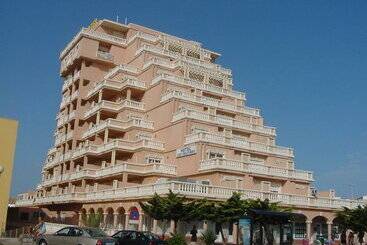 This hotel is located in the tourist centre of La Manga del mar Menor, around 150 m from the beach. Restaurants and bars... 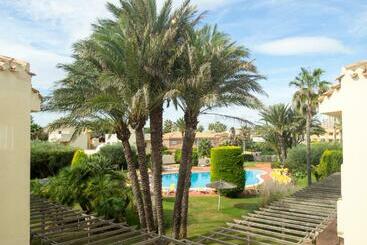 This cosy apartment resort is situated in the tourist area of La Manga del Mar Menor, around 350 m from the town centre.... 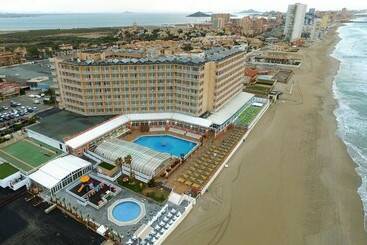 The hotel is located 25 km from Cartagena, 35 km from San Javier airport, 70 km from Murcia and 130 km from Alicante. 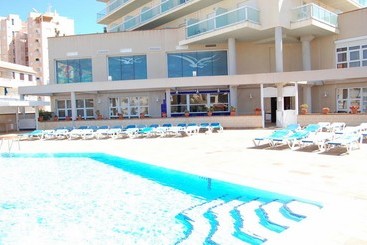 This modern, tourist hotel is located in the tourist centre of La Manga del Mar Menor, approximately 50 m from the nearest...

This attractive apartment complex is located at the entrance to the La Manga, just 100 meters from the Mar Menor and 200... 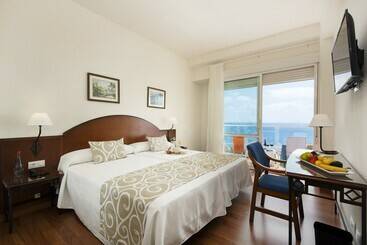 This hotel lies beside the beach in the saltwater lagoon of Mar Menor, around 250 m from the Mediterranean Sea. The nearest... 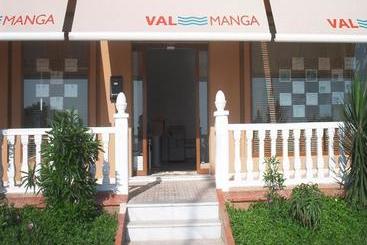 Apartments are located in the resort of Isla Grossa. About 50 m from the beach. In the outdoor complex, there...

In the south-east region of Spain on the Costa Calida, La Manga is a narrow stretch of land that divides the waters of Mar Menor and the Mediterranean Sea. This natural barrier boasts over 20km of sandy beaches. The area became popular in the 1960s and has developed into an attractive tourist resort.

When it comes to accommodation in La Manga, the choice of budget hotels is wide. As the land is only 200 metres wide in places, no hotel is very far from the beach.

La Manga has a number of distinct areas:

What to see and do in La Manga

La Manga is best known for its sporting activities. People from around the globe visit to play tennis, sail, cycle and go to the gym. Spa days are also popular. Water-sports are available from the beach and the harbour. There is also the Ceutimagina Science and Art Centre nearby where pieces of work from Goya and Dali have been displayed. Music, dinosaurs and legends exhibits can also be seen here.

What to eat in La Manga

As it is popular with international visitors, it's possible to get every kind of food in La Manga. Tapas and fresh seafood can be found at many restaurants, but you can also find sushi, Indian cuisine, Italian dishes and Asian food.

The Procession of Christ and the Fishermen of Cabo de Palos takes place on Easter Thursday. Marking the beginning of the Easter activities, local fishermen dress in traditional clothing. On July 16th, the patron saint of fishermen is celebrated. The Virgin del Carmen is transported by boat surrounded by other vessels.

How to move around in La Manga

There is a bus service that runs from Cartagena to La Manga, and a local service stopping at the harbour and beaches in summer every 30 minutes.

The climate in La Manga

This area has a Mediterranean climate that enjoys protection from the north winds. The temperature settles at around 26 degrees in July and August and March sees the most rainfall.

More interesting facts about and sights in Cambrils

La Manga, literally translated, means “sleeve’. This describes the slim shape of the land. The salty water of Mar Menor is believed to help sufferers of arthritis.

The most centrally located hotel in La Manga del Mar Menor with the best ratings is: Ona Marina Arpón.

If you're bringing a vehicle, we recommend that you book a hotel with parking in La Manga del Mar Menor, like Aparthotel La Mirage, Hotel Poseidon La Manga & Spa Adults Only or Apartamento Playa Principe.

If you´re looking for peace and quiet and want to stay at an adult-only hotel in La Manga del Mar Menor, we recommend Hotel Poseidon La Manga & Spa Adults Only.

According to our clients, if you´re travelling with children, the best hotels in La Manga del Mar Menor are Apartamentos Turísticos Hawaii 6, Hotel Aluasun Doblemar and Aparthotel La Mirage.

If you want to save time, the hotel in La Manga del Mar Menor with express check-in and check-out is Aparthotel La Mirage.

Some of the options for hotels with non-smoking rooms in La Manga del Mar Menor are Aparthotel La Mirage, Hotel Poseidon La Manga & Spa Adults Only and Hotel Aluasun Doblemar.