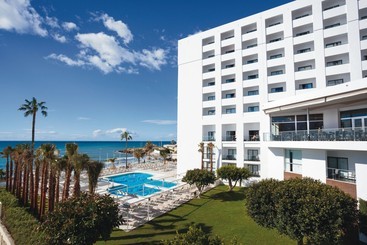 The Riu Monica Hotel is located in a quiet area of Nerja, next to the Playa de la Torrecilla Beach Promenade and within walking... 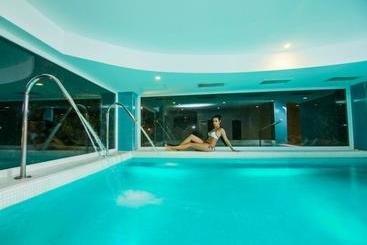 Just on the outskirts of Nerja, this little hotel provides peace and quiet without being too far off the beaten... 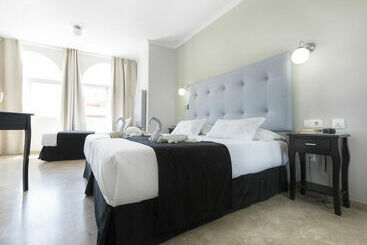 This enchanting hotel is located directly in the tourist centre. It is just a short five-minute walk to the renowned Balcon... 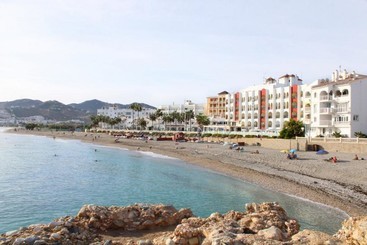 This hotel is located on the first sea line, in a quiet area next to the beach of Torrecilla, and few minutes walking from...

The preferred airport for Marina Turquesa is Malaga (AGP) - 56.2 km / 34.9 mi. Distances are calculated in a straight line... 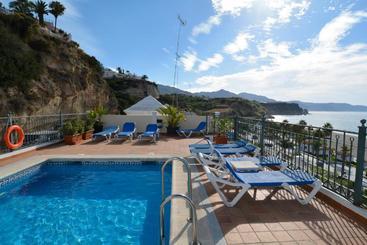 Enjoy recreation amenities such as an outdoor pool or take in the view from a terrace. Additional features at this apartment... 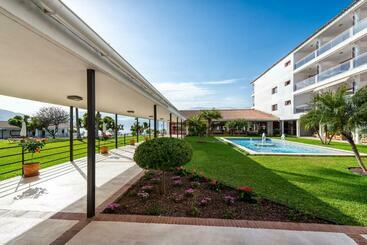 This upmarket hotel enjoys a location atop sheer cliffs looking out over the Costa Tropica. Wonderful panoramic views are...

Book your cheap hotel in Nerja

Located on the beautiful Costa del Sol in the province of Malaga, Nerja is a popular municipality that is part of the autonomous community of Andalusia in southern Spain. Situated 50km east of the more famous and prominent Malaga, Nerja is in the area that was occupied by the Moors and it’s evident in its heritage. one of the Spanish regions that used to be under Muslim rule.

Nerja boasts a strong and rich history, with lots of ancient paintings being discovered in the local Nerja Caves in 1959 showing evidence of incredibly early human existence and settlement. It is now, a modern tourist resort with all the amenities for a typical Spanish Costa holiday.

Cheap and affordable hotel accommodation is abundant in Nerja.

the main areas of interest in Nerja are:


What to see and do in Nerja

Some of the most popular and beloved sights and attractions include the Cuevas de Nerja which are a vast complex of caves that are famous within Spain. The town is backed by the Sierra Almijaraand it’s a popular hiking area. One of the most popular trails is the hike up the El Cielo Mountain. Other nice walks are to the El Aguila, a 19th-centruy aqueduct and to the pool at the top of Rio Chillar. Other places of interest are the Museo de Nerja, the El Salvador church, the Marina and Punta Lava, and the botanical gardens.


What to eat in Nerja

Nerja’s cuisine is very traditional. Key dishes include gazpacho which is a traditional soup served cold, sardines that are usually served grilled with a touch of oil and salt, and pochero which is a regional type of Spanish stew that is incredibly hearty and filling. Of course, local restaurants serve their own versions of paella.


Typical events and festivals in Nerja

Nerja plays host to a number of different and varied events over the course of the calendar year. Some of the most popular and highly attended festivals and occasions in the area include the Feast of St. Anthony that takes place every January, the traditional Carnival celebrations that take place across the entirety of Spain, and the Nerja Fair which takes place in October.


How to move around in Nerja

Much of the town is easily navigated on foot but there is a local bus service that offers a number of lines around town as well as fast routes to places like Granada, Almeria, and Seville. Taxis always welcome tourists and for something special there are the famous horse and carriage rides!


The climate in Nerja

Nerja experiences a warm and temperate climate all year round, generally the type of weather that you would expect of a Spanish holiday destination. Winters are milder and wetter than summers, but an average annual temperature of 18 degrees shows it’s never truly cold. The favoured holiday season is June to early September.

The most centrally located hotels in Nerja with the best ratings are: Apartamentos Latin, Apartamentos Nerja Bahia and Hostal Boutique Plaza Cantarero.

If you're bringing a vehicle, we recommend that you book a hotel with parking in Nerja, like Apartamentos Latin, Apartamentos Nerja Bahia or Inn Abril Nerja.

If you need a hotel with disabled access in Nerja, we recommend Apartamentos Jimmy, Apartamentos Nerja Bahia and Parador De Nerja.

If you want an adult-only hotel in Nerja, some of the best options for adults only are Hostal Ana - Adults Only, Hotel Riu Monica Adults Only and Hostal Don Peque (adults Only).

According to our clients, if you´re travelling with children, the best hotels in Nerja are Apartamentos Abril, Inn Abril Nerja and Apartamentos Jimmy.

The best hotels with a pool in Nerja are Apartamentos Latin, Apartamentos Nerja Bahia and Hotel Puerta Del Mar.

If you want to save time, the hotels in Nerja with express check-in and check-out are Apartamentos Jimmy, Hostal Dianes and Hostal Don Peque (adults Only).

Some of the options for hotels with non-smoking rooms in Nerja are Hostal Boutique Plaza Cantarero, Hostal Dianes and Hostal Don Peque (adults Only).

The best-rated hotels in Nerja with a gym are Hotel Balcón De Europa, Hotel Villa Flamenca and Hotel Riu Monica Adults Only.