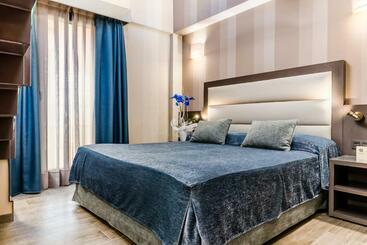 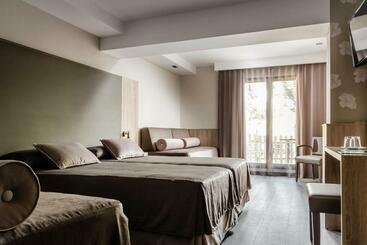 From Madrid airport take the A2 towards Zaragoza, Feria de Madrid, Aeropuerto, exit at N211 Molina de Aragón, Teruel, then... 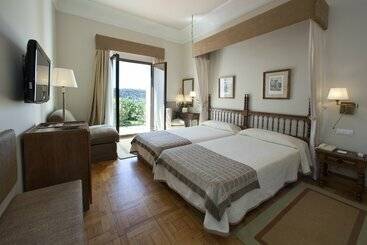 This hotel is located some 2 km away from the nerve centre of the city, from the splendid Mudejar towers or the cathedral,...

Book your cheap hotel in Teruel‎

An alluring assemblage of Islamic and Christian architecture, visiting Teruel is like stepping back in time. Eye-catching terracotta buildings, ornate panels and picture-postcard alleyways await you here. Many of the buildings are listed and protected, which adds to the city's impressive heritage which you can explore.

You can choose from a number of affordable hotel options in Teruel, both within the city centre and in the quieter suburbs.

Teruel has many neighbourhoods to explore‎:


What to see and do in Teruel‎

Teruel is famed for its Mudéjar architecture, like the impressive La Escalinata staircase, and Moorish fortifications. Some of the city's ancient towers can be climbed and visited, including Torre de San Pedro and Torre de El Salvador, while others like Torre de San Martín can only be admired from outside. To learn about the city's intriguing history, Museo de Teruel does a good job of highlighting the Iberian and Roman periods. The most famous museum, however, is Fundación Amantes, the mausoleum of the city's legendary lovers, Isabel and Juan Diego. If you’re travelling with little ones, the amusement park Dinópolis makes a great day out just 3km from the city centre.


What to eat in Teruel‎

Teruel has some great local restaurants serving up the region's finest local produce. Expect to find the delicious jamón de Teruel, juicy Calanda peaches and succulent ternasco de Aragón (lamb). Delicias de Teruel is the must-try signature dish, consisting of ham and bread with a tomato sauce. It’s simple and delicious. Pork Adobado is also popular, consisting of a tenderloin of pork marinated and cooked in chillies. Tapas is a great way to experience the region’s variety of flavours and specialities, from the black olives of Aragón to the many artisan cheeses.


Typical events and festivals in Teruel‎

Teruel hosts a number of festivities throughout the year, four of which are highly important to the city. Bodas de Isabel de Segura is celebrated in February in honour of the famed lovers of Teruel. The Fiestas del Ángel, or Angel parties, take place in July around San Cristóbal. Semana Santa, or Easter, is also special, with processions and concerts. Lastly, Fiestas del Jamón celebrates ham and its production in early September.


How to move around in Teruel‎

Teruel is served by a public bus network operated by Jimenez. It ferries residents and visitors throughout the city and surrounding areas. Taxis are also recommended within the central districts. If you're exploring the Aragon region, a rental car is recommended.

Teruel has a warm and temperate climate. Summers are generally warm to hot, with highs of 32°C. Winters can be cool, with potential lows dropping below 0°C. Chances of rain are also fairly even throughout the year, with an average 3 to 4 days of rain per month.


More interesting facts about and sights in Teruel‎

One of the more popular day trips from Teruel is the stunning Maestrazgo region, an area of unspoilt countryside, majestic hills and crystal-clear rivers. One of the more alluring sites here is the Cristal de Molinos Cave system, a labyrinthine wonder of stalactites and stalagmites.

The most centrally located hotels in Teruel with the best ratings are: Sercotel Torico Plaza, Hotel Reina Cristina and Hotel Teruel Plaza.

If you need a hotel with disabled access in Teruel, we recommend Hotel Civera, Sercotel Torico Plaza and Hotel Reina Cristina.

According to our clients, if you´re travelling with children, the best hotels in Teruel are Hotel Reina Cristina, Sercotel Torico Plaza and Hotel Civera.

If you want to save time, the hotels in Teruel with express check-in and check-out are Hotel Civera, Hotel Reina Cristina and Parador De Teruel.

Some of the options for hotels with non-smoking rooms in Teruel are Hotel Civera, Sercotel Torico Plaza and Hotel Reina Cristina.

If you're bringing a vehicle, we recommend that you book a hotel with parking in Teruel, like Hotel Civera, Hotel Reina Cristina or Parador De Teruel.

The best hotel with a pool in Teruel is Parador De Teruel.

The best-rated hotels in Teruel with a gym are Hotel Civera and Hotel Oriente.