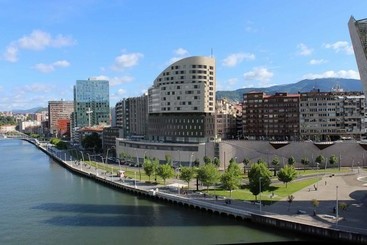 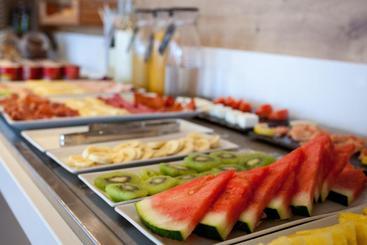 Featuring a fitness centre and a bar, Hotel Bed4U Bilbao is set in Bilbao. The property is situated less than 1 km from Arriaga...

Location: in the old part of town, just opposite the Mercado de La Ribera, near the river, between Bilbao La Vieja and the...

A modern hotel located in the financial center of Bilbao Its fabulous location allows direct access to the most important...

This comfortable guest house is a 15-minute walk from the famous Guggenheim Museum, located across the River Nervion. It... 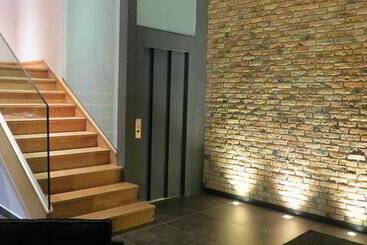 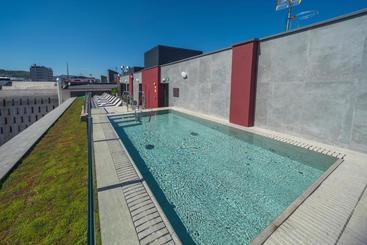 Catalonia Gran Vía Bilbao has a fitness centre, bar, a shared lounge and garden in Bilbao. This 4-star hotel offers a 24-hour...

Book your cheap hotel in Bilbao

Its port location made Bilbao a very important city in trading from the 14th century onwards, and in more modern times, it has proven itself to be a very popular European break destination for travellers from all corners of the continent.

One of the reasons for this popularity of tourism is the fact that visitors to Bilbao are able to find cheap and affordable hotel accommodation in many locations around the city.

Bilbao consists of a number of districts:


What to see and do in Bilbao

Some of the most important and interesting attractions in Bilbao are dedicated to art and culture. The most popular of these attractions include the likes of the striking Guggenheim Museum designed by Gehry, the Museum of Fine Arts which boasts a huge collection of pieces from the medieval times to modern day, and the famous Gothic revival Catedral de Santiago


What to eat in Bilbao

Bilbao has long been celebrated for its excellent regional cuisine. Some of the must try local signature dishes that you must seek out include bacalao pil-pil which is cod fried in garlic and olive oil, txangurro which is stuffed and baked spider crabs, and marmitako which is a traditional Basque style stew with tuna and potato. Be sure to work your way around a number of pintxos bars where the main offering is bread with all manner of toppings.


Typical events and festivals in Bilbao

Bilbao is a vibrant city that loves to host different events throughout the year. Some of the best out of the bunch include Festivals of San Blas in February, the large scale Bilbao Easter celebrations that are important to the city’s history and culture, and the Bilbao Night Marathon that takes place in October and provides a different type of running experience for the masses.


How to move around in Bilbao

There are five major forms of public transport within Bilbao. These are the underground Metro lines, the local buses, trams, buses connecting to the outskirts, and the main RENFE train line which connects the city to wider Spain. With five options plus a range of taxi services, Bilbao is arguably one of best connected cities in the region.


The climate in Bilbao

Bilbao’s two most defined seasons are summer and winter, with an average annual temperature of 19 degrees. January is the coldest month in the city with a still mild average of 13 degrees, whilst summers rise up to 25 degrees for perfect vacation temperatures. The most popular months for holiday travel in Bilbao are usually the late May to early September period.

It depends on the category of the hotel. If you want to stay at a 4-star hotel in Bilbao, the average price per night is 45 €, while you will pay an average of 40 € for a 3-star hotel, and in a more luxurious 5-star hotel, you"ll pay around 77 €.

You can make reservations at Gran Hotel Domine Bilbao, Hotel Meliá Bilbao and Hotel Carlton if you"re looking for a hotel with valet service for your visit to Bilbao.

Hotel Holiday Inn Express Bilbao Airport, An Ihg is the closest one to Bilbao.

If you need a hotel with disabled access in Bilbao, we recommend Hotel Gran Bilbao, Hotel Artetxe and Inn Casual Gurea.

If you´re looking for peace and quiet and want to stay at an adult-only hotel in Bilbao, we recommend Hotel Artetxe.

According to our clients, if you´re travelling with children, the best hotels in Bilbao are Hotel Occidental Bilbao, Hotel Miró and Inn Casual Gurea.

If you want to save time, the hotels in Bilbao with express check-in and check-out are Hotel Miró, Hotel Occidental Bilbao and Hotel Mercure Jardines De Albia.

Some of the options for hotels with non-smoking rooms in Bilbao are Hotel Gran Bilbao, Hotel Artetxe and Gran Hotel Domine Bilbao.