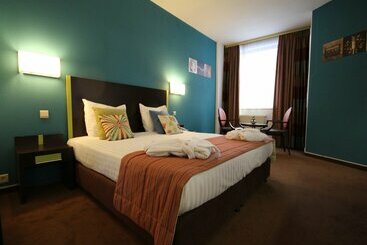 This hotel is not only located directly on Brussels? main market square, but at the heart of the pedestrianised zone that... Superbly located in the very heart of Brussels, adjacent to one of the most beautiful squares in Europe, Grand Place, close... 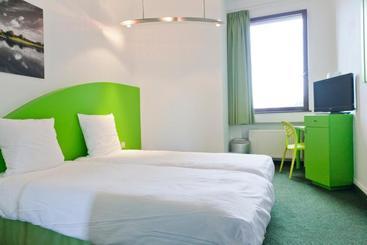 The airport is 13 kms from the hotel, take the train till Noordstation ( Gare du Nord ), and you could go walking to hotel... 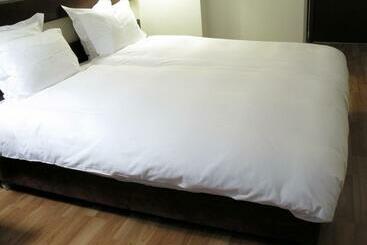 Set in the heart of Brussels' historic centre, Bedford Hotel is a boutique hotel located just 450 metres from the Grand-Place.... 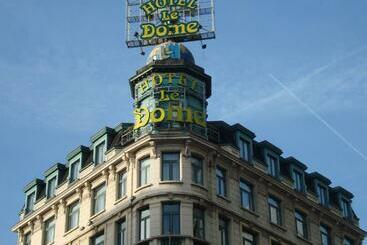 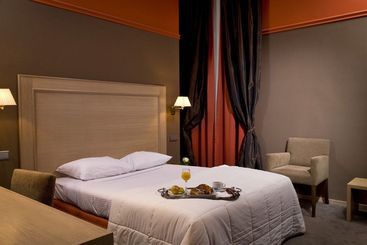 Located in the heart of Brussels, close to the Bourse and the Grand Place as well as the pedestrian's shopping street. 15...

Situated next to the World Trade Centre, in close proximity to the new business district. The Grand Place and cultural centre... 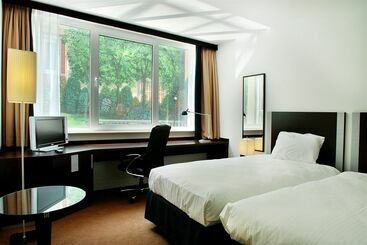 The preferred airport for Progress Hotel is Brussels (BRU-Brussels Airport) - 9.9 km / 6.1 mi. Distances are calculated in...

Book your cheap hotel in Brussels

The most expensive hotels are in the historic centre, but affordable accommodation in walking distance of the main attractions can also be found. Many small family-run operations are also available throughout the city, but booking ahead is strongly advised.

The city of Brussels is shaped like a pentagon, which is divided into nine districts. Most of the main attractions are in or around the Central District at the heart of Brussels, but shoppers are attracted to the Midi-Lemonnier District, which hosts the second largest market in Europe every Sunday, to the daily flea market in the Marolles/Marollen District and the antiques market in the Sablon/Zavel District. The Marais-Jacqumain District has the Martyrs Square which commemorates the victims of the 1830 Revolution, whilst the Freedom District has the Liberty Square, which has four statues honouring the freedoms of a democratic society.


What to see and do in Brussels

Brussels has many famous attractions:


What to eat in Brussels

Brussels prides itself on its food. Local specialities include stoemp, which is pureed root vegetables that complement steaks or stews, witloof, or Belgian Endive, a flavourful white vegetable and for the more adventurous there is raw herring, served with onion. Sea food is readily available, especially moules or mussels. This can all be washed down with over 400 varieties of beer and visitors can finish their meal with over 300 types of cheese.


Typical events and festivals in Brussels

Most of Brussels' special events are held in the summer. On two days in July over 1,000 people march through the streets for Ommegang, or “going round the church", while the Midi Fair is held in July or August and the Brussels Summer Festival (music concert) is held over 10 days in August. Every two years the Grand Place is covered in a flower carpet of begonias on Assumption Day (15 August). A Christmas market called Winter Wonders finishes the year.


How to move around in Brussels

The Brussels Metro (underground railway) has four lines and 60 metro stations. Confusingly the lines are numbered 1, 2, 5 and 6, as lines 3 and 4 exist as a tram service. There is a well-developed bus service, which travel along a network of bus lanes. Most of the attractions in the centre of Brussels can be visited on foot, although visitors should be wary of the busy traffic.


The climate in Brussels

Brussels has a temperate climate, with four distinct seasons. A visitor can expect highs of over 20 degrees Celsius in July and August and lows of just above freezing in the winter months, making snow a rarity.


More interesting facts about and sights in Brussels

Most museums in Brussels are free on the first Sunday of the month. Alternatively, tourists can purchase a Brussels Card, which allows a visitor access to the city’s museums for 24, 48 or 72 hours.

It depends on the category of the hotel. If you want to stay at a 4-star hotel in Brussels, the average price per night is 44 €, while you will pay an average of 36 € for a 3-star hotel, and in a more luxurious 5-star hotel, you"ll pay around 69 €.

You can make reservations at Hotel Rocco Forte Amigo, The Hotel Brussels and Hotel Stanhope By Thon S if you"re looking for a hotel with valet service for your visit to Brussels.

If you need a hotel with disabled access in Brussels, we recommend Hotel 9 Sablon, Hotel Nh Collection Brussels Centre and Hotel Stanhope By Thon S.

The best hotels in Brussels for adults only are Sunrise Apart and Hotel Queen Anne.

According to our clients, if you´re travelling with children, the best hotels in Brussels are Hotel Nh Collection Brussels Centre, Hotel Rocco Forte Amigo and Hotel Thon Bristol Stephanie.

If you want to save time, the hotels in Brussels with express check-in and check-out are Hotel Rocco Forte Amigo, Hotel Nh Collection Brussels Centre and The Hotel Brussels.

Some of the options for hotels with non-smoking rooms in Brussels are Hotel Thon Bristol Stephanie, Hotel 9 Sablon and Hotel Rocco Forte Amigo.