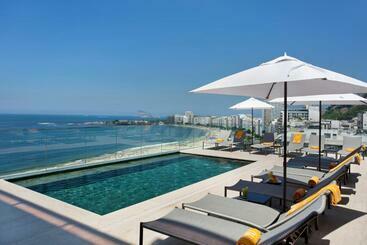 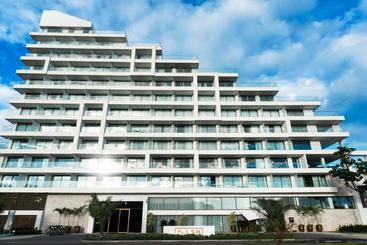 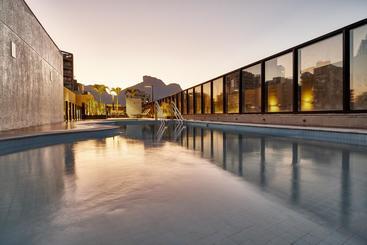 This is a beach from hotel located in the Atlantica Avenue. 7 kms to city centre 30 kms to the airport (rio de janeiro-galeão... 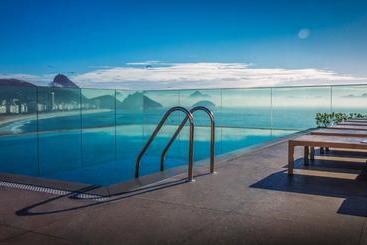 Located opposite the beach of Copacabana, the Miramar Hotel is surrounded by places of interest and in the middle of the...

Situated in a quiet residential area, only two blocks from Copacabana beach at Leme and 8 km from the city centre, within...

Located in the south-east of the country, Rio De Janeiro is one of the most prominent and famous cities in Brazil. It is the capital of the state that shares its name and is the second largest city in the country.

Part of the city has been designated a World Heritage Site by UNESCO, it has hosted a Foot World Cup and a Summer Olympics and is known for its fabulous beaches and also some of the world’s most famous landmarks including the statue of Christ the Redeemer and Sugar Loaf Mountain.

There is an abundance of cheap and affordable hotel accommodation in Rio De Janeiro.

The most popular and interesting parts of the city for visitors are:


What to see and do in Rio De Janeiro

There are so many things to do and see in Rio, you’ll need to make time away from the beaches. Though visible from anywhere in the city, it is worth going up Corcovado Mountain to see the Christ the Redeemer statue because of the breath-taking views. Another mountain trip is the cable car up to the top of the Sugar Loaf Mountain. For more urban pursuits, head to the neighbourhood of Saúde to Pedra do Sal, the birthplace of samba. A tour of the Favelas enables you to get up close and personal with life in Rio or you can take a tour of the Maracanãfootball stadium. You can enjoy a leisurely stroll in the Jardim Botânico or visit the church on Ilha Fiscal.


What to eat in Rio De Janeiro

Rio is a city that has a strong and storied food and drink culture. Some of the dishes that are most instantly recognisable as being classically Rio include Brazilian feijoada which is a national type of bean stew, codfish cakes which are a traditional type of fish appetizer, and picadinho which is another type of stew, this time made with braised beef, carrots, potatoes, and chayote.

The most famous event in Rio – if not the world - is the Rio De Janeiro Carnival in February. There are also the Festas Junina which is a celebration that takes inspiration from both old Europe and the New World every June, and the Rio International Film Festival that attracts the best in the business every November.


How to move around in Rio De Janeiro

The main form of public transport in and around Rio De Janeiro is the extensive and wide-reaching bus service. The bus network provides a cheap form of travel across the majority of the key locations within the region, and as of the 2016 Olympic Games, there is also a Bus Rapid Transit (BRT) system for even faster travel. Rio is also connected by train to other urban centres.


The climate in Rio De Janeiro

Rio’s weather is warm and humid all year round. The hottest and most humid period is between November and March when temperatures often rise into the low thirties, and even the in so-called ‘colder’ months of June, July and August temperatures rarely fall under the high teens. The peak time for travel and tourism in Rio De Janeiro is most definitely December to March.

It depends on the category of the hotel. If you want to stay at a 4-star hotel in Rio de Janeiro, the average price per night is 24 €, while you will pay an average of 22 € for a 3-star hotel, and in a more luxurious 5-star hotel, you"ll pay around 64 €.

You can make reservations at Hotel Copacabana Palace, A Belmond , Rio De Janeiro, Hotel Hilton Copacabana Rio De Janeiro and Hotel Rio Othon Palace if you"re looking for a hotel with valet service for your visit to Rio de Janeiro.

The best hotels in Rio de Janeiro for adults only are Hotel Pousada Casario and Hotel Arena Copacabana.