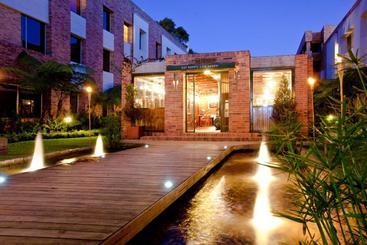 Eldorado Go straight on El Dorado Avenue 600 meters after leaving the Airport and the Hotel is on the right side.

The hotel is strategically located in the heart of Bogota's financial area, a few metres from prestigious educational centres... 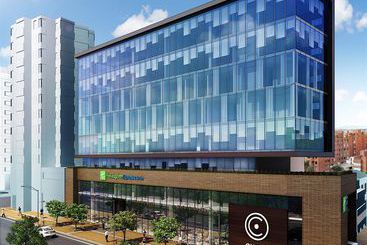 Offering a fitness centre, Holiday Inn Express & Suites is located in Bogotá, within the heart of the Financial district.... 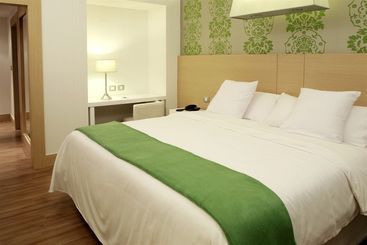 Location: strategically located in the most upscale neighbourhood of Bogota, near the popular 93 Park.

Hotel is located five minutes away from El Dorado International Airport by car and seven blocks the United States Embassy.... 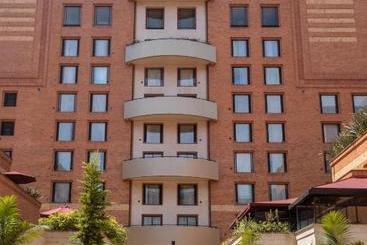 Located on El Dorado Avenue, near the United States Embassy and El Dorado International Airport, in a major urban, industrial...

Set in an impressive building only 50 metres from the National Museum, Hotel Ibis Bogota Museo offers rooms with free Wi-Fi...

The capital of Colombia, Bogotá is located in the center of the country; it is the seat of the three powers of the country, and one of the wealthiest sites in Colombia. The city of Bogotá represents justice, virtue, health and firmness. These qualities emerged during the colonial period and have continued through the Republican period and independence.
Bogotá dates from 1538, although not with its present name: initially the capital of Colombia was known as Santa Fe. Not until the time of independence would it receive its current name it is also referred to as the Athens of America by the German geographer Humboldt.
The city can boast of carrying an ample history on its shoulders, as well as serving to support the numerous towns that have since arisen in this region. Bogotá has always been at the forefront of South American development, being for example, the first city in South America to have an airport. Bogotá now has the appearance of a capable city in constant improvement, betting on its ambitious projects and strong infrastructural developments.
The capital of Colombia cannot boast of pleasant year-round temperatures due to its altitude, but this does not limit its role as the countrys main cultural point. Tourism in particular is growing stronger: take a walk down one of its streets full of colonial flavor and see for yourself. Dont miss the Primary Cathedral of Bogotá, the National Capitol or the Palace of Justice. The city of the orchid also contains numerous museums like the Museum of Colonial Art, the Archaeological Museum or the Museum of Bogotá. Dont forget to visit some of the citys most distinctive sites: El Dorado Avenue, Renaissance Park, the International Center, the Independence Park, the Museum of Modern Art, the National Library, the university sector and the Gold Museum. This route summarizes the citys enchantments for the traveler, and provides a window into one of South Americas most historical cities.
See more See less

The most centrally located hotel in Bogota with the best ratings is: Hotel Tryp By Wyndham Bogota Embajada.

It depends on the category of the hotel. If you want to stay at a 4-star hotel in Bogota, the average price per night is 20 €, while you will pay an average of 15 € for a 3-star hotel, and in a more luxurious 5-star hotel, you"ll pay around 35 €.

You can make reservations at Hotel Nh Collection Bogota Andino Royal, Hotel De La Opera and Hotel 101 Park House if you"re looking for a hotel with valet service for your visit to Bogota.

If you´re looking for peace and quiet and want to stay at an adult-only hotel in Bogota, we recommend Hotel Egina Bogotá.

According to our clients, if you´re travelling with children, the best hotels in Bogota are Hotel Four Seasons Casa Medina Bogota, Hotel Bogota Plaza and Hotel Jw Marriott Bogotá.

If you want to save time, the hotels in Bogota with express check-in and check-out are Hotel Bogota Plaza, Hotel Cosmos 100 & Centro De Convenciones Es Cosmos and Lancaster House.

Some of the options for hotels with non-smoking rooms in Bogota are Hotel Jw Marriott Bogotá, Hotel Faranda Express Belvedere and Hotel Estelar La Fontana.

If you're bringing a vehicle, we recommend that you book a hotel with parking in Bogota, like Hotel Jw Marriott Bogotá, Hotel Faranda Express Belvedere or Hotel Estelar La Fontana.