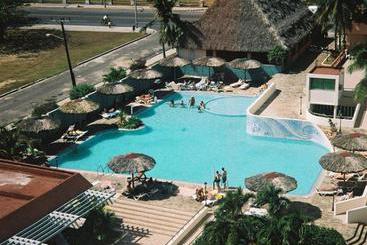 This hotel is located in the heart of Varadero, one of the most popular tourist destinations in Cuba, just minutes from... 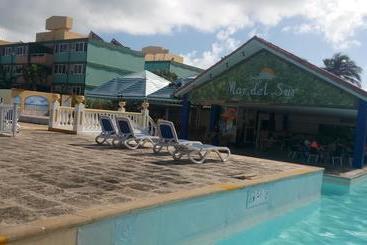 The resort is aimed at families in order to enjoy a pleasant stay at Varadero beach. It boasts 48 two bedroom apartments,... 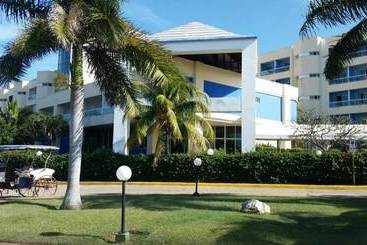 It is located 2 hours from La Habana and 25 minutes from the Varadero International Airport “Juan Gualberto Gómez”. It... 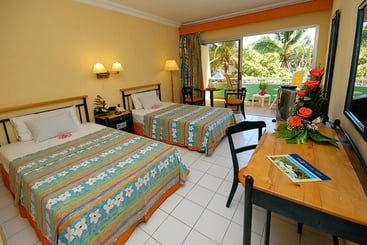 This hotel is located directly beside one of the most beautiful beaches in the world, Varadero Beach. The centre of Cárdenas... 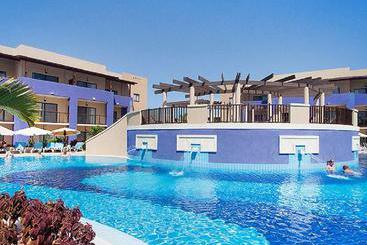 The hotel is located by Varadero Beach, near to the Gaviotas marina. Just 50 minutes' drive away is the beautiful city of... 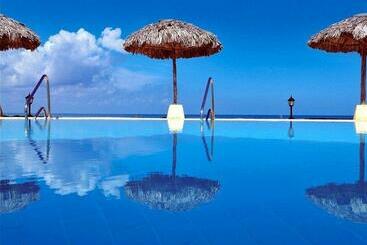 The beach hotel is situated on the Hicacos peninsula in the province of Matanzas, which is famous for its warm, turquoise-blue... 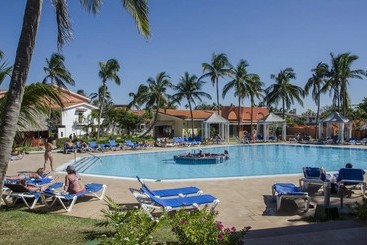 Located directly beside the beach in beautiful and famous Varadero, less than 1.5 km from the centre. Only a few metres away... 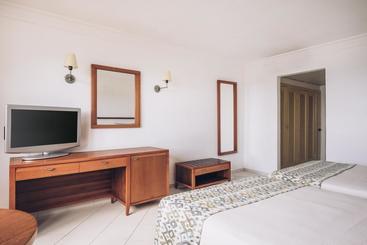 Built on a natural cliff on the Peninsula of Hicacos, the hotel is situated alongside a 20-km-long strip of...

Book your cheap hotel in Varadero

Varadero is a town on the northern coast of Cuba, on the Hicacos Peninsula in the western province of Matanzas. It is one of the most popular tourist resorts in the Caribbean.

Varadero means “dry dock” in Spanish, who named it in the 16th century, as a place where they could repair their fleet. In the late 19th century, residents from nearby Cardenas started to build second homes in Varadero and tourism began to grow. Varadero now welcomes over 1 million visitors a year.

As expected for a town based on tourism, there is a huge variety of accommodation in Varadero. The most expensive hotels are in the north of the town, facing the sea. Cheaper accommodation can be found further from the beach.

Playa Coral is 10 miles to the west of Varadero and has coral reefs, which are close enough to swim out to. Diving equipment can be hired. Further west is the town of Matanzas, which has many examples of 19th century architecture. The church Iglesia de Monserrate is on a hill and offers an impressive view of the area. 10 miles to the south east of Varadero, tourists will find the coastal town of Cardenas which has three museums on the colourful history of the area.


What to see and do in Varadero

Most visitors to Varadero never leave the resort, but it has a number of attractions nearby:


What to eat in Varadero

The unofficial national dish of Cuba is roast pork or puerco, which is usually served with black beans or frijoles and plantains or platanos. A stew of black beans called potaje is also popular. Visitors can enjoy ice cream for dessert or flan a form of Crème Caramel. A variety of fruit juices are available to drink. You should request jugo natural if you want the real thing. Otherwise rum is the most famous beverage in Cuba.


Typical events and festivals in Varadero

Varadero has a number of fun events, held throughout the year. Every February Varadero hosts a motorbike rally where proud owners of their Harlistas Cubanas show of their equivalent of a Harley-Davidson bike. Every June the World Music Festival comes to Varadero, with Latin American artists performing in different place throughout the town. In the third week of October the Melia Golf Club event is played at the Varadero Golf Club.


How to move around in Varadero

Most visitors to Varadero will stay in the resort and will need no other transportation than their own two feet. Those who want to visit attractions further afield can usually rely on tour buses arranged through their hotel. There is a public bus service from Varadero to Havana, which is slow (three hours) but cheap. Cars can be hired at the airport or from most hotels.


The climate in Varadero


More interesting facts about and sights in Varadero

Varadero is the closest point in Cuba to America, a distance of 90 miles. That does not make it any easier for Americans to visit, however.

It depends on the category of the hotel. If you want to stay at a 4-star hotel in Varadero, the average price per night is 40 €, while you will pay an average of 24 € for a 3-star hotel, and in a more luxurious 5-star hotel, you"ll pay around 53 €.

If you want an adult-only hotel in Varadero, some of the best options for adults only are Hotel Blau Varadero - Adults Only, Hotel Meliá Las Américas - Adults Only and Hotel Starfish Cuatro Palmas All Inclusive - Adults Only.

According to our clients, the best hotels in Varadero to stay at with children are Hotel Allegro Palma Real and Resort Be Live Experience Tropical.

If you're bringing a vehicle, we recommend that you book a hotel with parking in Varadero, like Hotel Allegro Palma Real.

The best hotels with a pool in Varadero are Resort Be Live Experience Tropical, Resort Roc Barlovento - Adults Only and Resort Roc Arenas Doradas.

The best-rated hotels in Varadero with a gym are Resort Be Live Experience Tropical and Hotel Allegro Palma Real.