Hotels in the centre of Guayaquil 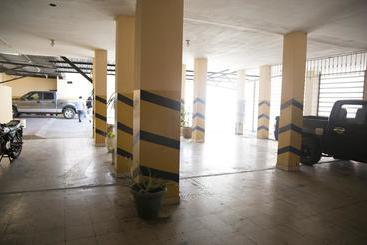 Tropical Inn Hotel offers spacious accommodation, an indoor swimming pool, a sauna and free Wi-Fi. It is located in the heart...

Although it is not the capital of Ecuador, Guayaquil is the countrys most densely-populated city as well as the primary hub for aerial traffic, making it an important stop when entering and leaving Ecuador. Guayaquil, whose complete name is Santiago de Guayaquil, is in fact one of the most densely-populated cities on the planet.
Rich ethnic diversity adds to its enchanted location on the Eastern coast of the Pacific, to the extent that the city is practically filled with life and culture! Although it is known as a place of passage, the many people who have chosen to take up residence there enjoy a thoroughly contemporary lifestyle.
Guayaquil was founded in the 14th century, and was long known as an important port as well as an outstanding colony. Since then, small and constant changes, such as population increase and economic development, have attracted more and more inhabitants to put down roots in this city; although some use it as a stepping stone to find a better life elsewhere, they always maintain their ties with Guayaquil.
The climate of Guayaquil is tropical and highly affected by the presence of the ocean and the cold currents that bathe the city. Because of this, temperatures tend to be pleasant year-round, but sink lower in winter than in other latitudes that would otherwise possess a similar climate. Both the citys climate and its location encourage tourism in this enterprising city, where the visitor can enjoy the multitude of parishes that are both rural and urban. Guayaquils main attractions include: a stroll accompanied by the waves crashing on the Simón Bolivar levee, a visit to the museums, cafés and theaters or indeed a stroll along another of the saltwater levees. Although it does not display the colonial splendor of other South American cities, Guayaquil can pride itself on its vibrancy, a city in which activity never ceases and a demonstration of the true economic motor of Ecuador.
See more See less

The most centrally located hotel in Guayaquil with the best ratings is: Hotel Sheraton Four Points.

It depends on the category of the hotel. If you want to stay at a 4-star hotel in Guayaquil, the average price per night is 25 €, while you will pay an average of 23 € for a 3-star hotel, and in a more luxurious 5-star hotel, you"ll pay around 45 €.

Hostel Apart Guayaquil is the closest one to Guayaquil-José Joaquín de Olmedo International .

You can make reservations at Hotel Oro Verde Guayaquil, Hotel Unipark By Oro Verde S and Hotel Hilton Colon Guayaquil if you"re looking for a hotel with valet service for your visit to Guayaquil.

According to our clients, if you´re travelling with children, the best hotels in Guayaquil are Hotel Grand Guayaquil, Ascend Collection, Hotel Unipark By Oro Verde S and Hotel Oro Verde Guayaquil.

If you want to save time, the hotels in Guayaquil with express check-in and check-out are Hotel Oro Verde Guayaquil, Hotel Hilton Colon Guayaquil and Hotel Continental.

Some of the options for hotels with non-smoking rooms in Guayaquil are Hotel Oro Verde Guayaquil, Hotel Grand Guayaquil, Ascend Collection and Hotel Hilton Colon Guayaquil.

If you're bringing a vehicle, we recommend that you book a hotel with parking in Guayaquil, like Hotel Oro Verde Guayaquil, Hotel Palace Guayaquil or Hotel Continental.