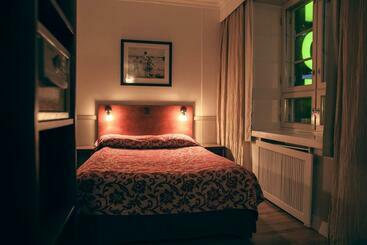 With a convenient location only 15 minutes’ walk from Helsinki Central Station, this hotel features en-suite rooms with... New modern hotel opened from April 2010 in the Hakaniemi district of Helsinki with good connections and many services nearby.1...

Located on Helsinki’s Katajanokka island, this hostel is a 5-minute tram ride from the city centre. Kauppatori Market Square... 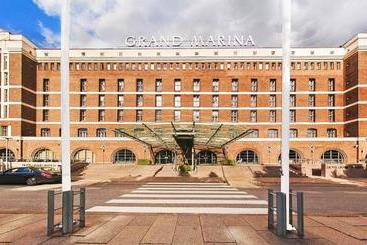 The hotel is located in Katajanokka. Marina Congress center, Market Square and the Cathedral are within easy reach. It provides... 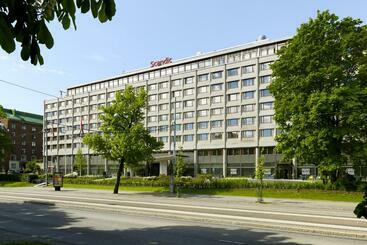 The hotel is located in Helsinki, opposite to parkland and the Finlandia Congress Centre. Olympic Stadium, Temppeliaukio... 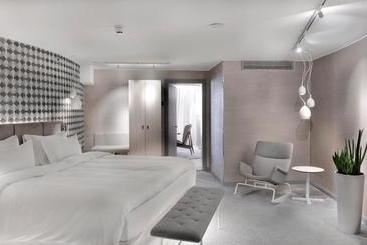 This hotel is situated in the heart of Helsinki, close to the main attractions, shopping area and central station.20 kms... 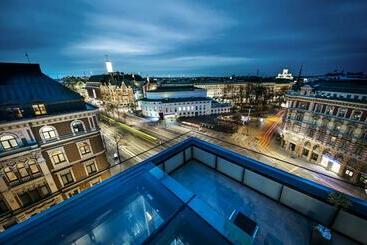 This hotel is located 5 minutes away from the Esplanaden and Helsinki's famous shopping mall Stockmann. Walking distance...

The peninsula on which Helsinki sits is surrounded by more than three hundred islands, and thus it is known as the Daughter of the Baltic Sea. It was founded by Swedish king Gustavo Vasa in the mid-16th century. At the beginning of the 19th century it was conquered by Russia, only obtaining independence in 1917. Helsinki is a modern city growing at great speed, but maintains a provincial architectural style of low buildings...
The Helsinki Railway Station is an internationally renowned masterpiece, embodying the transition between Romanticism and Neorealism. Not far away is the Museum of Beautiful Ateneum Arts, with a collection of the countrys most important art. But the historical center of Helsinki only truly begins with the Seat of the Senate (Senaatintori), a neoclassical structure from the 19th century whose design is evocative of the architecture of Saint Petersburg. The most significant buildings that surround it are the Luterana Cathedral (Tuomiokirkko), the Palace of the Government, and the university library. A few steps away are the citys oldest Rococo building, the Sederholm House of 1757. If you approach the port you will enjoy the atmosphere of Market Plaza (Kauppatori), the statue of Havis Amanda (symbol of the citys birth), and taste salmon or reindeer meat and purchase souvenirs. The Old Market is a covered market 100 meters away. From Market Plaza, take a ferry to the marine stronghold of Suomenlinna, declared a Patrimony of Humanity by UNESCO: this citadel served as a base for the Swedish and the Russians during their reigns, and today is a treasure of history and Finnish culture.
Walk north along the relaxing Esplanadi Stroll to the Presidential Palace (Presidentinlinna), which was the old residence of the czars. In Kanavataku Street is the 19th century Cathedral of Uspenski: this, the largest Orthodox Church in Western Europe, shows clear Russian influences in its architecture.
Although a little removed from the center of Helsinki, dont forget to visit the Church of Temppeliaukio, which was constructed out of living rock and crowned with a copper cupola. In addition, the classically monumental Parliament Building displays a not-to-be-missed façade of red granite and Corinthian columns.
See more See less

The most centrally located hotels in Helsinki with the best ratings are: Hotel Marski By Scandic, Radisson Blu Plaza Hotel, Helsinki and Hotel Kämp.

It depends on the category of the hotel. If you want to stay at a 4-star hotel in Helsinki, the average price per night is 60 €, while you will pay an average of 50 € for a 3-star hotel, and in a more luxurious 5-star hotel, you"ll pay around 94 €.

Hotel Avion Helsinki is the closest one to Helsinki.

If you need a hotel with disabled access in Helsinki, we recommend Hotel Hilton Helsinki Kalastajatorppa, Hotel Marski By Scandic and Hotel Holiday Inn Helsinki - Expo, An Ihg.

According to our clients, if you´re travelling with children, the best hotels in Helsinki are Hotel Hilton Helsinki Strand, Hotel Crowne Plaza Helsinki - Hesperia, An Ihg and Hotel Holiday Inn Helsinki - Expo, An Ihg.

If you want to save time, the hotels in Helsinki with express check-in and check-out are Hotel Marski By Scandic, Radisson Blu Plaza Hotel, Helsinki and Hotel Scandic Paasi.

Some of the options for hotels with non-smoking rooms in Helsinki are Hotel Hilton Helsinki Kalastajatorppa, Hotel Marski By Scandic and Hotel Holiday Inn Helsinki - Expo, An Ihg.

If you're bringing a vehicle, we recommend that you book a hotel with parking in Helsinki, like Hotel Hilton Helsinki Kalastajatorppa, Hotel Marski By Scandic or Hotel Holiday Inn Helsinki - Expo, An Ihg.