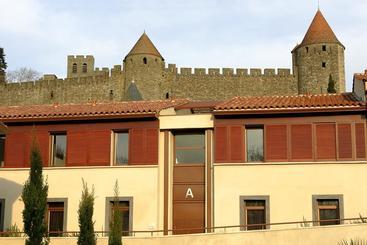 The residence is situated at the foot of the famous medieval fortress and ramparts of the city of Carcassonne, classified... 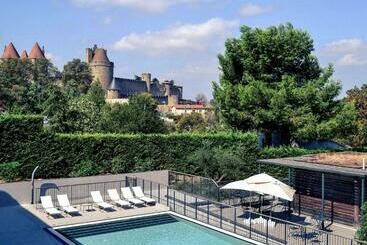 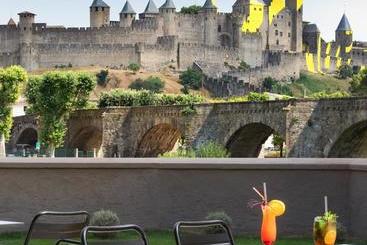 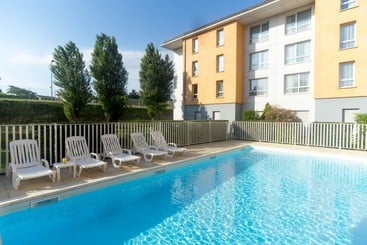 Situated between beautiful countryside and the historical centre of the city, the resort enjoys an outstanding location.... 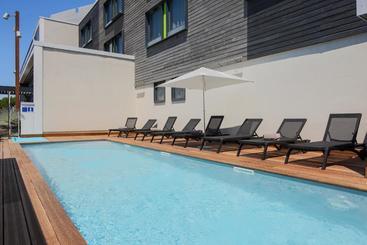 Located in Carcassonne, this Campanile hotel is 2 kilometres from the town centre and a 10-minute drive from the train station.... 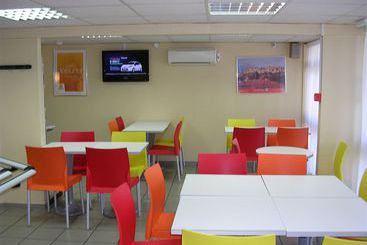 The hotel is situated in the heart of the city. It is located close to many tourist attractions such as Saint Nazaire Basilica,... Book your cheap hotel in Carcassonne

Rising from a grassy plain, like something from a Disney fairy tale, the walled city of Carcassonne sits atop a rocky hill in Aude. The French city is a department of the greater commune of Occitanie. This medieval city is a UNESCO World Heritage Site, and as such, it is truly a delight for history-lovers. The town also serves as a great base to explore this wonderful part of France. Toulouse, Montpellier and the coastal area of Narbonne are all within a one-day trip's distance from Carcassonne.

The walled town may be antique, but there is no problem finding modern, cheap hotels in Carcassonne. There are all grades of accommodation with facilities available, including pools and spa facilities. There are also excellent choices of holiday accommodation in the new town, outside the walls.

It’s easy to identify the city's distinct districts— the medieval area within the walls of the city and the newer part of town that sits across the river, just outside the fortification. Some of the most notable neighbourhoods of Carcassonne are:

What to see and do in Carcassonne

Medieval architecture is the main interest in this modern city, but the town still offers all of the usual tourist traps. Some of the main sights to see and activities to do in Carcassonne include:

What to eat in Carcassonne

Food in the city is typical of the Languedoc region, which is really just a subset of southern France's cuisine— but with a much greater emphasis on gamey meat. Dishes you should try include:

Typical events and festivals in Carcassonne

Whenever there's an event, the locals in Carcassonne like to party! The medieval surroundings also provide a unique environment and atmosphere for events, some of which include:

How to move around in Carcassonne

The city connects to major regional centres, as well as Paris, via road and train. Bus routes service La Ville Basse, and in the summer, are supplemented by Touc's free electric-shuttle service. The older parts of Carcassonne are car-free, so you can easily traverse the area on foot.

The climate in Carcassonne

Carcassonne's temperate Mediterranean climate delivers warm summers and mild winters. July and August are the warmest months, typically recording temperatures as high as 40° C. The daily average is an ideal 28° C. January is the coldest month, while April is the wettest.

It depends on the category of the hotel. If you want to stay at a 4-star hotel in Carcassonne, the average price per night is 67 €, while you will pay an average of 39 € for a 3-star hotel, and in a more luxurious 5-star hotel, you"ll pay around 90 €.

You can make reservations at Hotel De La Cité & Spa Mgallery and Hotel Domaine D Auriac Relais & Châteaux if you´re looking for a hotel with valet service for your visit to Carcassonne.

If you want to save time, the hotels in Carcassonne with express check-in and check-out are Hotel Du Pont Vieux, Hotel Domaine D Auriac Relais & Châteaux and Hotel Espace Cite.