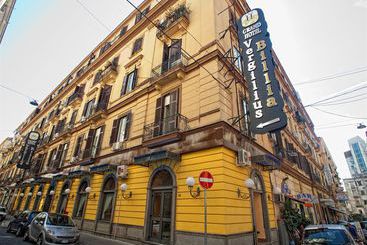 The hotel is located in the heart of the city of Naples, only a few steps from public transport links such as the Central... 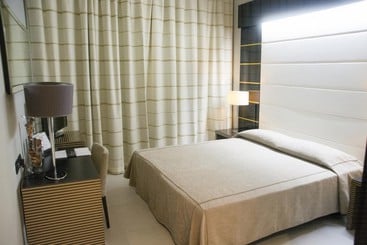 Featuring a free fitness centre and solarium, Palazzo Salgar is set in Naples, a 5-minute walk from Piazza Mercato Square....

The Romeo Hotel is a luxury boutique hotel in the heart of Naples, Italy. Located on the waterfront near the city's vibrant... 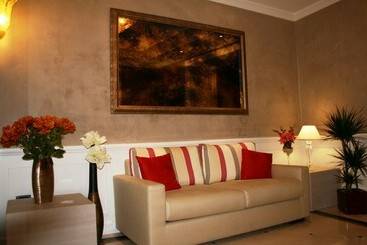 The Hotel is located in the heart of the beautiful Parthenopean city, close to the main railway station, harbor and a short... 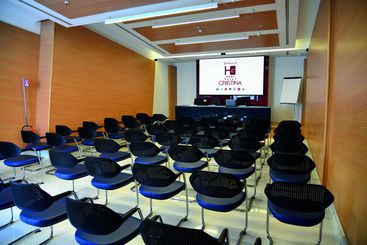 It is a new facility that is located in the Centre of Naples, a few steps from the historic centre, well connected with all... 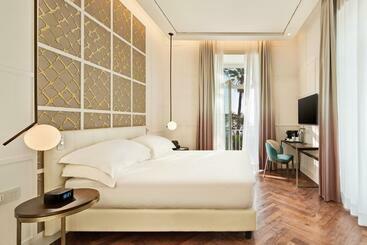 The Britannique Hotel Napoli, Curio Collection By Hilton is in a quiet area of Naples, 10 minutes' walk from the Via dei...

Book your cheap hotel in Naples

Holding the title of third largest city in Italybehind Rome and Milan, Naples is the regional capital of Campania. With a metropolitan population of more than 3 million, the city is a thriving and busy destination with one of the most densely populated areas in Europe

With the first Greek settlements recorded as far back as the first millennium BC, evidence suggests that Naples is one of the oldest continuously inhabited regions in entire world. Naples is a coastal city and a huge port, but unlike many other major cities on the oceanfront, it has no beaches. It is still a magnet for tourists not only for its own attractions but also because it makes a great base from where to explore Mount Vesuvius, Pompeii, and the Amalfi Coast.

Tourism is an important part of the economy, and Naples can be visited on a budget thanks to a large range of cheap and affordable hotel accommodation.

Naples consists of a number of individual districts, including:


What to see and do in Naples

As well as all the aforementioned places and attractions, there are plenty more. Like the port with its mix of cruise liners, luxury yachts, and (often US) navy ships, the Castel Nuovo a medieval castle that also houses an art gallery, the bar-lined Piazza Bellini, the catacombs of Fontanelle Cemetery, the marble sculptures of the Cappella Sansevero, and the Pio Monte della Misericordia, home to a Caravaggio painting. Amazing day trips can be had to Mount Vesuvius, Sorrento, Pompeii, Herculaneum, and the islands of Capri and Ischia.


What to eat in Naples

Pizza was invented in Naples and it is ubiquitous. The best place to find pizza is Via dei Tribunali aka “Pizza Alley”. But there’s more to Neapolitan food than pizza. Seafood is heavily represented, particularly in spaghetti alle vongole (pasta with clams). For a vegetable dish, friarelli which is a special local broccoli with garlic and olive oil, is a must. And for dessert, sfogliatelle which is a multi-layered sweet pastry treat.


Typical events and festivals in Naples

Some of the most high profile occasions include the Maggio dei Monumenti which is a month long celebration of Naples culture from April to June, the Ferragosto festivities which is one of Italy’s biggest Catholic holidays every August, and the Napoli Film Festival which attracts some of the world’s biggest cinema stars from September to October.


How to move around in Naples

Public transport is a busy and thriving system of buses, metro, trams, and trains. There are a number of different passes that tourists can buy with many of the companies in partnership to offer the best spread of options for visitors. Also note that many of the key locations in the centre of the city are easily navigable on foot.


The climate in Naples

Naples experiences a Mediterranean climate with mild, rainy winters and very hot, sunny summers. The coldest months are January and February where average temperatures are in the region of 9 or 10 degrees. The summer is much warmer, with July and August regularly reaching into the mid to high 20s.

The most centrally located hotels in Naples with the best ratings are: Bed and Breakfast Spaccanapoli Comfort Suites, Grand Hotel Oriente and Chiaja Hotel De Charme.

It depends on the category of the hotel. If you want to stay at a 4-star hotel in Naples, the average price per night is 47 €, while you will pay an average of 34 € for a 3-star hotel, and in a more luxurious 5-star hotel, you"ll pay around 117 €.

You can make reservations at Grand Hotel Santa Lucia, Grand Hotel Vesuvio and Hotel Palazzo Alabardieri if you"re looking for a hotel with valet service for your visit to Naples.

If you're bringing a vehicle, we recommend that you book a hotel with parking in Naples, like Hotel Weekend A Napoli, Hotel Rex Lifestyle or Grand Hotel Santa Lucia.

If you´re looking for peace and quiet and want to stay at an adult-only hotel in Naples, we recommend B&b Art Suite Principe Umberto.

According to our clients, if you´re travelling with children, the best hotels in Naples are Grand Hotel Vesuvio, Grand Hotel Oriente and Grand Hotel Santa Lucia.

If you want to save time, the hotels in Naples with express check-in and check-out are Hotel Weekend A Napoli, Bed and Breakfast Spaccanapoli Comfort Suites and Hotel Rex Lifestyle.

Some of the options for hotels with non-smoking rooms in Naples are Hotel Weekend A Napoli, Bed and Breakfast Spaccanapoli Comfort Suites and Hotel Rex Lifestyle.