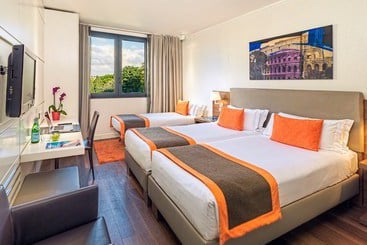 Located 5 minutes away from the Trastevere. It is 4 km from the historic center (Piazza Venezia) and 24 km from Fiumicino...

Surrounded by a large park, Ath Green Park Hotel Pamphili is in a green residential area of Rome, 1.5 km from Cornelia Metro... 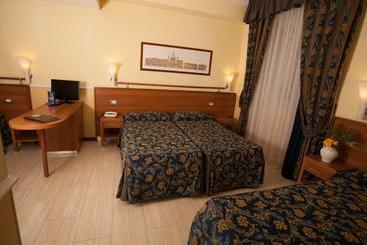 The hotel is close to the Termini station, in a central, easy to reach position well linked to the most important tourist... Located in the heart of the capital the hotel is just steps from the Opera House and the church Santa Maria Maggiore, 15... 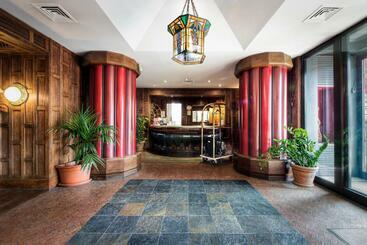 Colonial charm and modern comfort, combined with our hospitality, make the Colony Hotel a comfortable and elegant place to... 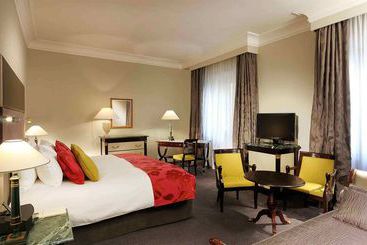 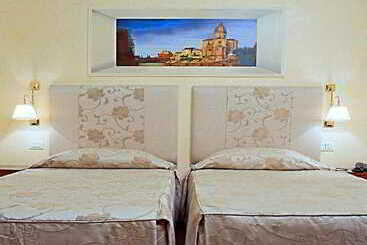 This historic hotel is situated in the centre of Rome, just 5 minutes from Termini railway station and less than 1 km from...

Located in the heart of Rome, in the middle of Via Nazionale known for shopping and Exhibition Hall, the new ?Rome Times...

Book your cheap hotel in Rome

Located in central Italy, Rome was built on seven hills beside the River Tiber. It is the capital city of Italy and is the country's most popular tourist destination.

Founded so long ago, Rome's early history has combined with myth. It became the capital of the Roman empire, which in the 2nd century covered 6.5 square kilometres.

The City's Roman remains are popular with tourists, as are its museums, its architecture, its fountains and piazzas(squares) and its churches, from the smallest chapels to the largest basilicas.

Rome's most expensive hotels are in the historic centre, where cheaper alternatives are difficult to find. For more affordable accommodation visitors must head towards the outskirts of the city. The districts of Borgo or Trastevere are popular with those on a tight budget.

Centro Storico is the historic centre of Rome, which has many of the main tourist attractions including the Pantheon and the Trevi Fountain. On the opposite side of the Tiber is Trastevere, which is an ideal place for a quiet coffee or an evening meal. Head north for Borgo, which borders the Vatican City and has a plethora of souvenir shops. Esquilino is a largely residential area, but also includes a number of bars and cafes, as well as the church Santa Maria Maggiore. Monti appears like a village within Rome. It has its own central square, wine bars and small shops.


What to see and do in Rome

Rome has many world famous attractions:


What to eat in Rome

Italians pride themselves on their food. A popular appetiser is bruschetta, or toasted bread, with garlic and olive oil. For mains there is Suppli, which is fried rice croquettes stuffed with mozzarella cheese, or saltimbocca alla romana, slices of veal, with sage and dry cured ham called prosciutto. For dessert there is a wide selection of gelato or ice cream. This can all be washed down with a fine selection of wines from Friuli and Orvieto.


Typical events and festivals in Rome

Unsurprisingly, many of Rome's events are centred round the Christian calendar. The New Year is welcomed with San Silvestro and Capodanno a free concert and fireworks display in the Piazzo del Popolo. Easter week is marked by Settimana Santa e Pasqua with the Stations of the Cross ceremony in the Colosseum on Good Friday and the papal blessing on Easter Sunday. July sees the Cosmophonies a juxtaposition of classical and contemporary acts including Greek theatre, modern dance and rock concerts. Finishing the year, a child orientated Christmas Market is held in the Piazza Navona in early December.


How to move around in Rome

Getting around the historic centre is probably best done on foot, as the roads are congested, which makes the buses slow. Rome's Metropolitana (underground railway) has three main lines, A, B and C, and 73 different stations. This is certainly the quickest way to get across the city, but the number of stops in the centre are limited, as it was designed to allow people to travel in from the suburbs.


The climate in Rome

Rome has a Mediterranean climate, with four distinct seasons. Summers are warm and dry, with highs around 30 degrees Celsius in July and August, whilst winters are mild with temperatures in the single digits.


More interesting facts about and sights in Rome

Rome has over 2,000 fountains, more than anywhere else in the world. Approximately €3,000 are tossed into the Trevi Fountain every day. The money is donated to the Caritas charity, which is dedicated to tackling poverty.

The most centrally located hotels in Rome with the best ratings are: Hotel Artemide, Hotel Eden - Dorchester Collection and Hotel Europa.

You can make reservations at Hotel The Hoxton, Rome, Hotel Locarno and Villa Spalletti Trivelli - Small Luxury Hotels Of The World if you"re looking for a hotel with valet service for your visit to Rome.

If you need a hotel with disabled access in Rome, we recommend Hotel Artemide, Hotel Eden - Dorchester Collection and Hotel Locarno.

If you want an adult-only hotel in Rome, some of the best options for adults only are Inn Dreaming Rome, Hotel Appia 442 and Hotel Esedra Inn.

According to our clients, if you´re travelling with children, the best hotels in Rome are Hotel Eden - Dorchester Collection, Hotel The Hoxton, Rome and Hotel Artemide.

If you want to save time, the hotels in Rome with express check-in and check-out are Hotel Eden - Dorchester Collection, Hotel Europa and Hotel The Inn At The Roman Forum.

Some of the options for hotels with non-smoking rooms in Rome are Hotel Artemide, Hotel The Hoxton, Rome and Hotel Eden - Dorchester Collection.