Hotels in the centre of Bangkok 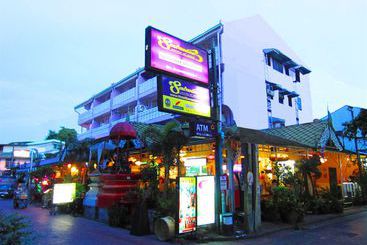 The hotel is located on the corner of a small quiet street, just a few minutes walk from the Khaosan road and Phra-A-Thit...

Book your cheap hotel in Bangkok

Located on the Chao Phraya River delta, Bangkok is the capital and most populated city in Thailand. With a population of more than eight million, the city accounts for more than 12 percent of the country’s total inhabitants.

Over the years, Thailand and Bangkok in particular has come to be regarded as a bucket list destination for any travellers making their way around Southeast Asia, and tourism has become one of the city’s key avenues of income. 22.7 million people visit the city every year. It’s a fabulous place of palaces and temples, and street food, megamalls, and markets and some of the friendliest most welcoming people on earth.

Visitors to Bangkok will find plenty of great options for cheap and affordable hotel accommodation.

The most popular areas of the city for tourists are:


What to see and do in Bangkok

Some of the key sights and attractions that should be at the top of anybody’s Bangkok bucket list include the museum section of the Grand Palace, Wat Arun which is a riverside temple with a famous landmark spire, Wat Traimit, the temple of the Golden Buddha, the Giant Swing in front of Wat Suthat temple, and Jim Thompson’s House. Must have experiences include shopping at Chatuchak Market and the Damnoen Saduak Floating Market. You can take a Thai cookery class, a meditation lesson, or see some traditional dancing or puppetry, and to escape the buzz of the city, take a rest in Lumpini Park.


What to eat in Bangkok

Bangkok is famous for food at both ends of the spectrum, from humble street food to fine dining in Michelin star restaurants. Some of the dishes that are most famous in the city include Pad Thai, a famous noodle dish, tom yum goong which is a type of spicy shrimp soup, som tum which is a fresh green papaya salad, and tom kha kai which is a delicious chicken coconut soup.


Typical events and festivals in Bangkok

Some of the most popular and well known occasions are the Makha Puja which is a Buddhist holiday involving lots of candle lit ceremonies in February, the World Film Festival of Bangkok which takes place in November, and the Bangkok New Year Countdown which is one of the most famous New Year’s Eve celebrations in the world.


How to move around in Bangkok

There are a wide range of options in Bangkok when it comes to public transport. There is the skytrain, the subway, and a network of river taxis that can help travellers to avoid the busy congestion of normal car taxi cabs that clog up the roads all day long. Your choice of transport really depends on how quickly you want to get from A to B. It is also worth noting that much of Bangkok’s central district can be navigated on foot.


The climate in Bangkok

The weather in Bangkok can be divided into two distinct seasons: the dry season and the rainy season. Dry season is traditionally between November and February, and from March to May the weather is warmest with average temperatures that can reach up into the low to mid 30s. Bangkok’s rainy season occurs from May to November, with extended periods of wetness with the temperatures remaining in the high 20s. This results in high humidity.

It depends on the category of the hotel. If you want to stay at a 4-star hotel in Bangkok, the average price per night is 21 €, while you will pay an average of 14 € for a 3-star hotel, and in a more luxurious 5-star hotel, you"ll pay around 45 €.

You can make reservations at Hotel Mandarin Oriental Bangkok, Hotel The Athenee , A Luxury Collection , Bangkok and Hotel Ariyasom Villa if you"re looking for a hotel with valet service for your visit to Bangkok.

If you need a hotel with disabled access in Bangkok, we recommend Hotel Mandarin Oriental Bangkok, Hotel The Athenee , A Luxury Collection , Bangkok and Hotel The Okura Prestige Bangkok.

If you want an adult-only hotel in Bangkok, some of the best options for adults only are Rama Gardens Hotel Bangkok, Hotel Kingston Suites Bangkok and Hotel Praya Palazzo.

According to our clients, if you´re travelling with children, the best hotels in Bangkok are Hotel Ariyasom Villa, Hotel The Athenee , A Luxury Collection , Bangkok and Hotel Mandarin Oriental Bangkok.

If you want to save time, the hotels in Bangkok with express check-in and check-out are Hotel The Athenee , A Luxury Collection , Bangkok, Hotel Old Capital Bike Inn and Hotel The Okura Prestige Bangkok.

Some of the options for hotels with non-smoking rooms in Bangkok are Hotel Mandarin Oriental Bangkok, Hotel The Athenee , A Luxury Collection , Bangkok and Hotel Ariyasom Villa.