Hotels in the centre of Dubai 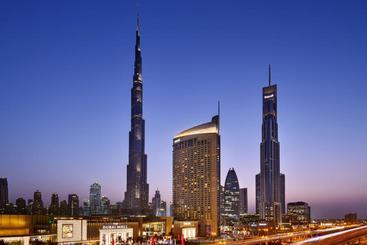 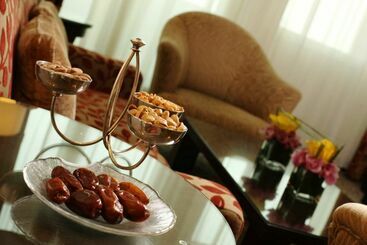 This hotel is part of the prize-winning Al Murook complex at the heart of Dubai's business district. It is a true attraction... 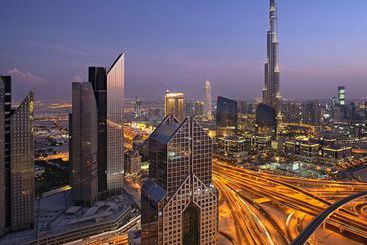 This hotel is located on the famous Sheikh Zayed Street Situated close to Jumeirah Beach, the commercial centre, various... 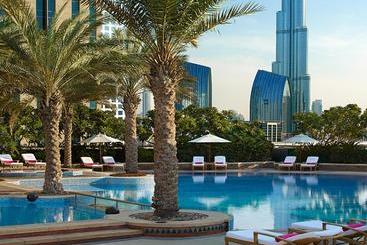 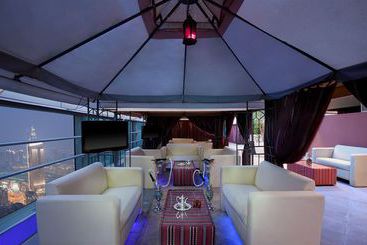 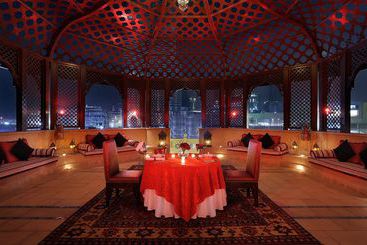 The luxurious hotel is ideally situated in the Downtown Dubai area, within short distance from all major business... 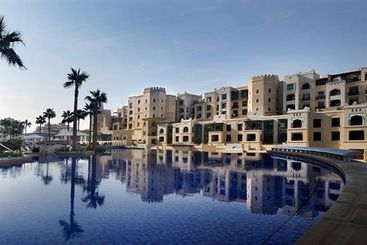 The Address is set in the heart of Downtown Burj Dubai. Offering the perfect base for the business traveler. Just 15 minutes...

The hotel is less than a 5-minute drive away from Dubai International Financial Centre, the convention centre and the World...

Book your cheap hotel in Dubai

Dubai is on the eastern coast of the Arabian Peninsula and is the largest city in the United Arab Emirates.

In the early 20th century, Dubai established itself as an important port that charged no tax on exports or imports. Trade funded improvements in infrastructure before oil was discovered in 1966, which transformed Dubai, as construction greatly increased. Today, Dubai’s economy is more reliant on trade, financial services and tourism, than oil revenue.

Dubai's most expensive hotels are in the historic centre, Bur Dubai, but cheaper alternatives can be found. Travellers on a tight budget are more likely to stay in the Deira area with its busy marketplaces, whilst families will gravitate to Jumeirah and its beach.

Bur Dubai is the historic centre of the city and its oldest buildings can still be found in the harbour area. To the north of Dubai Creek is Deira, which has numerous markets or souks and a couple of museums. To the south east, tourists will find the Inner Suburbs with a number of lavish waterfront restaurants and the Ras al Khor Wildlife Sanctuary, further east. South of the centre is the Central Business District on the Sheikh Zayed Road, which has Burj Khalifa, the tallest building in the world, as well as the largest shopping mall and biggest fountain. East of here is Jumeirah and its beach. Cultural attractions include the Jumeirah Mosque and the Jumeirah Archaeological Site.


What to see and do in Dubai

Dubai has many famous attractions:


What to eat in Dubai

The finest in Emirati cuisine can be sampled in Dubai. For a mid-morning snack with your coffee, try luquaimat, which are like small doughnuts, covered in a date sauce and sesame seeds. For a starter, samboosa is a hot pastry, with a choice of filling. For a main course, Margoogat is stew filled with tomatoes, a choice of meats and spices. For dessert, chebab is a hot pancake, full of sour cheese and date syrup. To drink, try the sparkling Anatolian Fizz cocktail of fizzy wine and pomegranate molasses.


Typical events and festivals in Dubai

Dubai has a number of popular annual events, held outside the summer months. The Dubai Marathon takes place every January, with a record amount of prize money on offer. Every February sees the Dubai International Jazz Festival, with an impressive list of performers. In the last Saturday in March, the Dubai World Cup, the world’s richest horse race is held. Every year on 2 December, Dubai celebrates UAE National Day with fireworks and dancing.


How to move around in Dubai

Dubai has a two-line Metro (underground railway) which links all the major sites. The buses are cheap and comfortable, but slow. Wooden boats called abras can take visitors across the Creek in just a few minutes. Bikes can be hired.


The climate in Dubai

Dubai has a hot desert climate. Summers are hot and humid, with highs around 40 degrees Celsius during the day and temperatures only dropping to 30 degrees at night. Winters are cooler, with temperatures around 15 degrees, and comparatively wet with about 5 days of rain a month.


More interesting facts about and sights in Dubai


The crime rate in Dubai is one of the lowest in the world. This is possibly unrelated to the fact that the Dubai police drive sports cars.

It depends on the category of the hotel. If you want to stay at a 4-star hotel in Dubai, the average price per night is 22 €, while you will pay an average of 16 € for a 3-star hotel, and in a more luxurious 5-star hotel, you"ll pay around 66 €.

You can make reservations at Hotel Grosvenor House, A Luxury Collection , Dubai, Hotel Raffles Dubai and Hotel Jumeirah Mina A Salam if you"re looking for a hotel with valet service for your visit to Dubai.

If you need a hotel with disabled access in Dubai, we recommend Hotel Grosvenor House, A Luxury Collection , Dubai, Hotel Raffles Dubai and Hotel Jumeirah Mina A Salam.

If you want an adult-only hotel in Dubai, some of the best options for adults only are Hotel Jumeira Rotana, Hotel Centro Barsha By Rotana and Hotel Villa Rotana Dubai.

According to our clients, if you´re travelling with children, the best hotels in Dubai are Hotel Jumeirah Mina A Salam, Hotel Raffles Dubai and Hotel Grosvenor House, A Luxury Collection , Dubai.

If you want to save time, the hotels in Dubai with express check-in and check-out are Shangrila Hotel, Dubai, Jumeirah Beach Hotel and Radisson Blu Hotel, Dubai Deira Creek.

Some of the options for hotels with non-smoking rooms in Dubai are Hotel Grosvenor House, A Luxury Collection , Dubai, Hotel Raffles Dubai and Hotel Jumeirah Mina A Salam.