Budget hotels in Side 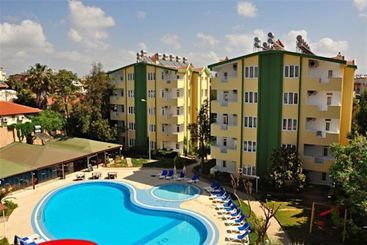 Side 1.2 mi from city centre

Approximately forty five minutes away from Antalya Airport, 150 m from the gently shelving sands of Side Beach(via... 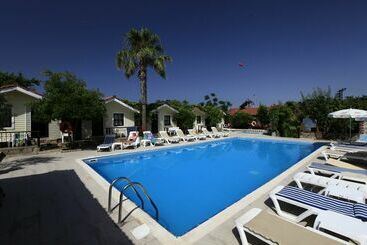 This hotel is situated 50 m from the sandy Kucuk Beach in the quietest part of Side, surrounded by the ancient ruins and... 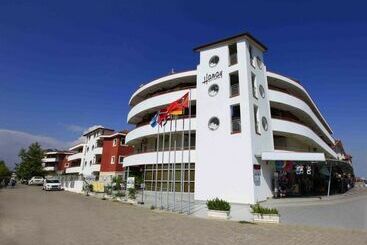 The apartment complex is approximately 2 km west of Side. A beautiful sand beach is only 800 m away from the complex. There... Side 724 yd from city centre

Enjoy recreation amenities such as an outdoor pool or take in the view from a garden. This hotel also features complimentary... Side 632 yd from city centre

Situated 1 km from the beach of Side, Melis Hotel features air-conditioned guest rooms with a private balcony. There is an... 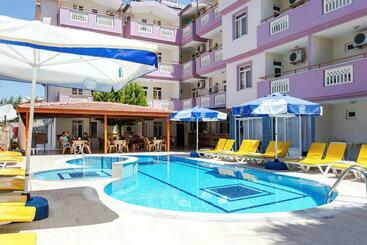 Side 624 yd from city centre

This complex lies in a secluded location, some 1.5 km from the centre of Side and about 1.3 km from the beach. An abundance... 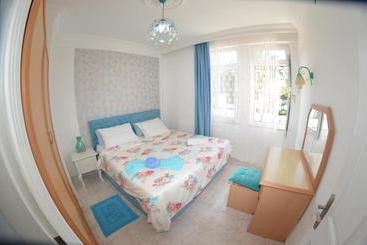 Side 1.1 mi from city centre

Be sure to enjoy recreational amenities, including an outdoor pool, an outdoor tennis court, and a fitness center. Additional...

Book your cheap hotel in Side

Located on the southern Mediterranean coast of Turkey, Side is a city in the province of Antalya that boasts an amazing history and a dramatic backdrop of the Taurus Mountains.

With history dating all the way back to the likes of Alexander the Great and the Roman Empire, Side has been declared one of the most important early settlements in the Western World. It is famed for being the place where Mark Anthony and Cleopatra had their trysts but today is a laid-back family-friendly resort.

Visitors who want to come to Side to soak up all of that important history and lovely beaches will find a wide array of cheap and affordable hotel accommodation.

Side consists of a number of individual surrounding areas, including:


What to see and do in Side

The history of the town has produced some great attractions Just a few highlights are the Apollon Temple, the ruins of Apollo’s temple overlooking the sea, the Nymphaeum,the ruins of an ancient Roman fountain, a Roman amphitheatre, and Hellenistic city walls and main gate.You can also learn the history of Side in the town museum. For a nice day trip, Side is only a few kilometres away from Manavgat, a town known for its beautiful waterfalls and an aquapark is not far away in Okurcalar.


What to eat in Side

Side very much keeps within the classic tradition of Turkish cuisine when it comes to regional food and drink. Some of the best known and most celebrated of these classic dishes include baklava,an iconic sweet pastry treat, kofte which are a type of Turkish meatball, and kumpir which is a dish involving crispy baked potato with a varied choice of fillings.


Typical events and festivals in Side

Some of the most popular occasion are the Side International Culture and Art Festival that combines lots of different art and culture during the summer, the International Antalya Film Festival, and the Antalya Marathon that attracts some of biggest names in long distance running each year.


How to move around in Side

Cars are not allowed into the town centre which is easy to navigate on foot but there are local bus services. Holidaymakers are advised to used taxis – especially those visiting Side for the first time..


The climate in Side

The climate in Side is a traditional Mediterranean one. The summers are hot and dry with an average temperature of around 27 degrees, and the winters are cooler with the potential for plenty of rainfall, with an average temperature of 17 degrees. The mild winters mean that Side is a destination for a winter sun holiday, but there is no doubt that the summer months of June to early September are the most popular.

Frequently asked questions about Hotels in Side

The most centrally located hotels in Side with the best ratings are: Hotel Sunprime Dogan Side Beach Adults Only, Hotel Side Star Beach All Inclusive and Hotel Trendy Side Beach.

It depends on the category of the hotel. If you want to stay at a 4-star hotel in Side, the average price per night is 29 €, while you will pay an average of 20 € for a 3-star hotel, and in a more luxurious 5-star hotel, you"ll pay around 34 €.

You can make reservations at Hotel Voyage Sorgun All Inclusive, Hotel Kaya Side and Hotel Arum Barut Collection Ultra All Inclusive if you"re looking for a hotel with valet service for your visit to Side.

If you're bringing a vehicle, we recommend that you book a hotel with parking in Side, like Hotel Voyage Sorgun All Inclusive, Hotel Side Star Elegance or Hotel Melas Holiday Village.

If you need a hotel with disabled access in Side, we recommend Hotel Voyage Sorgun All Inclusive, Hotel Aydinbey King S Palace and Hotel Side Star Elegance.

The best hotels in Side for adults only are Hotel Akdora Resort&spa and Hotel Alba Royal Ultra All Inclusive Adults Only.

According to our clients, if you´re travelling with children, the best hotels in Side are Hotel Side Star Elegance, Hotel Aydinbey King S Palace and Hotel Voyage Sorgun All Inclusive.

If you want to save time, the hotels in Side with express check-in and check-out are Hotel Melas Holiday Village, Hotel Sunprime Dogan Side Beach Adults Only and Alba Resort.

Some of the options for hotels with non-smoking rooms in Side are Hotel Voyage Sorgun All Inclusive, Hotel Aydinbey King S Palace and Hotel Side Star Elegance.