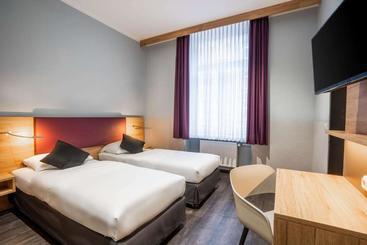 The hotel is located on a side street just behind Frankfurt's main train station, and within easy reach of the trade fair... 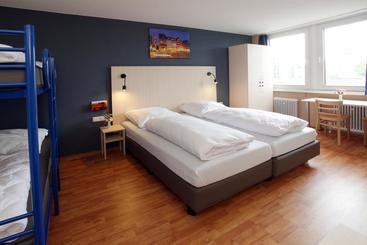 Featuring a bar, Main Hotel Frankfurt City Hauptbahnhof is located in Frankfurt in the Hessen region, a 13-minute walk from...

This half-timbered hotel in central Frankfurt dates back to the 17th century. It offers unique rooms, a daily breakfast buffet...

The preferred airport for Colour Hotel is Frankfurt (FRA-Frankfurt Intl.) - 9.4 km / 5.9 mi. Distances are calculated in...

The preferred airport for Hotel Columbus is Frankfurt (FRA-Frankfurt Intl.) - 9.4 km / 5.8 mi. Distances are calculated in...

The preferred airport for Hotel Am Kurfuerstenplatz is Frankfurt (FRA-Frankfurt Intl.) - 9.6 km / 6 mi. Distances are calculated...

Located in the heart of Germany, Frankfurt is a cosmopolitan, culturally rich city, and seat of Germanys most important banks, while the highest skyscrapers in Europe dominate the citys skyline. The first records of habitation on this site date from 3000 BC, although the citys current name emerged only in 500 BC, due to Frankish domination of the region. Throughout history, Frankfurt has enjoyed great commercial success, which is still widely apparent today.

Begin your trip in Frankfurts Financial District, the Westend, which is popularly known as Mainhatten for its combination of the River Main and the profile of skyscrapers so reminiscent of Manhattan. From the 19th century Old Opera, the Alte Oper, the two crystal towers of Deutche Bank can be seen. From here go to the stock-market building, Börse, with its 43 meter-high cupola and its bull and bear statues in the entrance, representative of the rise and fall of the stocks traded within. Nearby is Hauptwache, one of Frankfurts most central squares, from which the pedestrian walkway and the commercial Zeil Street can be accessed. Here can be found the attractive building that formerly housed the police station and the mayoral seat, and that today harbors a pretty cafe. To enjoy the best views of Frankfurt, climb to the lookout point of the Main Tower.

At 23-25, Großer Hirschgraben, you can see the Goethe House and Museum, which conserves the memory of the past. Not far away is Römerberg (the central square in Frankfurts Old Town), surrounded by historical houses of half-framed walls: the Römer, or City Council, is between two buildings of typical stepped façade, the offices situated in the house that belongs to the consistory (ecclesiastical court). And, a little beyond, is the Cathedral, or Kaiserdom, with its 95-meter gothic tower.

After visiting Frankfurts Financial District and Old Town, cross the River Main by the Eiserner Steg pedestrian bridge and visit the Museumsufer, the longest avenue in Europe dedicated to museums. Found there, among others, is the Städelsche Kunstinstitute und Städtische Galerie (Städel Institute of Art and Municipal Gallery) with its extensive collection of European paintings dating from the 14th c to the 20th century. And finally, if you wish to experience the oldest district of Frankfurt and to enjoy the apple wine (äppelwoi) in the traditional wood taverns, go to the Sachsenhausen, south of the Museumsufer and the river.
See more See less

It depends on the category of the hotel. If you want to stay at a 4-star hotel in Frankfurt, the average price per night is €33, while you will pay an average of €27 for a 3-star hotel, and in a more luxurious 5-star hotel, you"ll pay around €67.

You can make reservations at Hotel Kempinski Frankfurt Gravenbruch, Hotel Steigenberger Frankfurter Hof and Hotel Grand Hessischer Hof Frankfurt if you"re looking for a hotel with valet service for your visit to Frankfurt.

If you want an adult-only hotel in Frankfurt, some of the best options for adults only are Hotel Carlton, Hotel Trip Inn Frankfurt Nordwestzentrum and Achat Frankfurt City.

According to our clients, if you´re travelling with children, the best hotels in Frankfurt are Hotel Grand Hessischer Hof Frankfurt, Hotel Steigenberger Frankfurter Hof and Hotel Kempinski Frankfurt Gravenbruch.

If you want to save time, the hotels in Frankfurt with express check-in and check-out are Hotel Kempinski Frankfurt Gravenbruch, Hotel Steigenberger Frankfurter Hof and Hotel Hamburger Hof.

Some of the options for hotels with non-smoking rooms in Frankfurt are Hotel Kempinski Frankfurt Gravenbruch, Hotel Steigenberger Frankfurter Hof and Hotel Hamburger Hof.