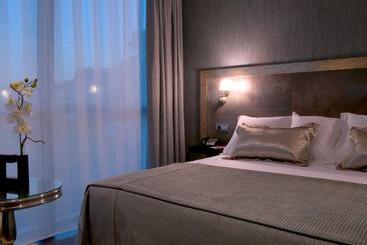 This recently opened hotel is located just 700 metres from the beautiful Oviedo cathedral and old town with plenty of shops,... 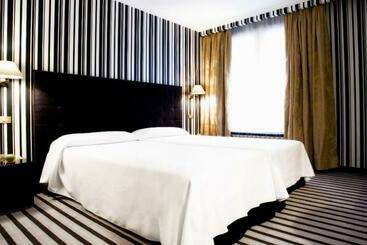 The preferred airport for Hotel Clarin is Oviedo (OVD-Asturias) - 26.2 km / 16.3 mi. Distances are calculated in a straight... 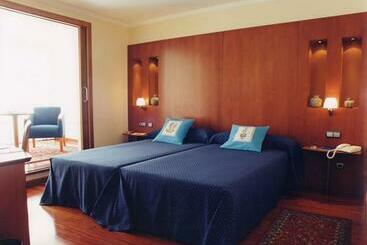 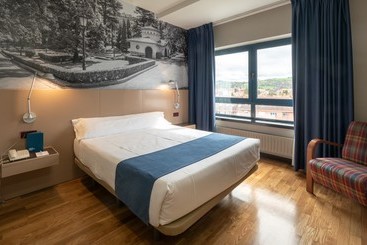 Situated just a 5 minute walk from the historic center of the city, close to the cathedral and Calle Gascona, also known...

This modern hotel offers a free Wi-Fi zone, free parking and a large sun terrace with wonderful views of Oviedo. A flat-screen... 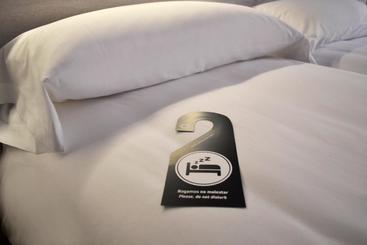 This out of the ordinary hotel is found within walking distance to the main centre and shopping areas, right in the centre...

Book your cheap hotel in Oviedo

Located in the Principality of Asturias in northern Spain, Oviedo is a beautiful historic city that is also the commercial and administrative centre of the entire region. With one foot in the historical past and one foot in modern-day commerce and business, the city is a wonderful mixture of the old and the new that is perfect for contemporary tourism.

With a number of cultural hotspots and areas of historical relevance, Oviedo is an ideal location for a long break in the north of Spain.

Such breaks are made increasingly accessible thanks to the high number of cheap and affordable hotels in and around the city. You can find something to suit every kind of budget.

Oviedo consists of a number of districts:


What to see and do in Oviedo

Some of the best and most popular attractions in Oviedo include a visit to the iconic Catedral de San Salvador, the city’s Gothic cathedral that dates back to the 14th century. Tourists can also send themselves on an artistic scavenger hunt in the form of searching for all of the Esculturas de Oviedo statues that are placed throughout the city. The statues are a very eclectic mix and feature characters such as Woody Allen and General Franco. Another recommendation is a visit to the Museo de Bellas Artes, Oviedo’s museum of fine art.

There are also three unique churches in Oviedo built in the distinctive Asturian style. Ranking among the most remarkable in Spain, they date to the 9th century and the best to see is the Santa María del Naranco.


What to eat in Oviedo

Oviedo boasts a number of special signature dishes. Some of the meal that tourists must go out of their way to try include fabada, which is a type of bean stew make with cuts of pork, arroz con leche which is local take on a traditional rice pudding, and carne gobernada which is meat dish prepared with a garlic, onion, and white wine sauce. Oviedo is also known for its cider production and it’s a great time to visit the city during harvest in October.


Typical events and festivals in Oviedo

Oviedo plays host to a number of different events and festivals throughout the year. Some of their most prominent occasions include the Twelve Night parade called Cabalgata de los Reyes Magos de Oriente, a week long street food festival called the Feast of San Mateo, and El Desarme, or Disarmement’s Day, which commemorates a victory of the locals of a Carlist army during the First Carlist War in the 1830s.


How to move around in Oviedo

The easiest way to navigate around Oviedo is via the regular and well maintained bus service that operates across the city. There are also two major train lines that run in and out of the city: the RENFE pointing south towards Madrid and the FEVE which operates more locally with connections to places like Galicia and Cantabria.


The climate in Oviedo

Oviedo enjoys a mild to hot climate across the year. The most rainfall the city experiences comes in November, making it the least popular time for tourism. With dry weather in July and hot temperatures of an average 23 degrees in August, the summer months are definitely the most ideal for travel and holiday making in Oviedo.

The most centrally located hotels in Oviedo with the best ratings are: Hotel & Spa Princesa Munia, Hotel Barceló Oviedo Cervantes and Aparthotel Campus.

It depends on the category of the hotel. If you want to stay at a 4-star hotel in Oviedo, the average price per night is 28 €, while you will pay an average of 22 € for a 3-star hotel, and in a more luxurious 5-star hotel, you"ll pay around 50 €.

Hotel Marqués De La Moral is the closest one to Oviedo-Asturias.

You can make reservations at Hotel & Spa Princesa Munia, Eurostars Hotel De La Reconquista and Las Caldas by blau hotels if you"re looking for a hotel with valet service for your visit to Oviedo.

According to our clients, if you´re travelling with children, the best hotels in Oviedo are Hotel Nh Oviedo Principado, Hotel Eurostars Palacio De Cristal and Hotel & Spa Princesa Munia.

If you want to save time, the hotels in Oviedo with express check-in and check-out are Hotel & Spa Princesa Munia, Hotel Iberik Santo Domingo Plaza and Hotel Fruela.

Some of the options for hotels with non-smoking rooms in Oviedo are Hotel & Spa Princesa Munia, Hotel Eurostars Palacio De Cristal and Hotel Barceló Oviedo Cervantes.

If you're bringing a vehicle, we recommend that you book a hotel with parking in Oviedo, like Ayre Hotel Alfonso Ii, Hotel Campoamor or Hotel Carreño.